Snow and Dust over Inner Mongolia 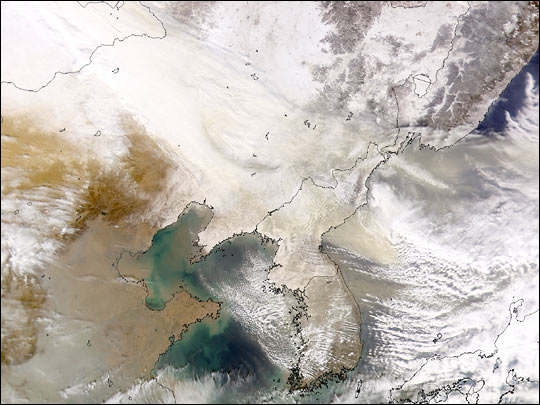 A severe snow-and-sand storm hit an 80,000 square-mile (205,000-square-km) stretch of the Chinese province of Mongolia on New Year’s Eve, killing 21 people and leaving thousands of people to face possible starvation. The affected area is located about 250 miles (400 km) northwest of Beijing. It is the worst snowstorm to hit the region in more than 50 years.

Lasting about 3 days, the storm dumped 24 inches (60 cm) of snow mixed with sand from the Gobi Desert, stranding many residents in deep drifts. The Chinese Red Cross reports that almost 1 million people were affected by the storm and at least 10,000 head of livestock are confirmed dead. As many as 120,000 residents are in need of food and other supplies.

The Sea-viewing Wide Field-of-view Sensor (SeaWiFS), flying aboard the OrbView-2 satellite, acquired this image of the storm on January 2, 2001, as it approached China’s eastern provinces. You can see storm clouds (white pixels) and windblown dust (brownish pixels) crossing the Yellow Sea and East China Sea toward Japan and the western Pacific.