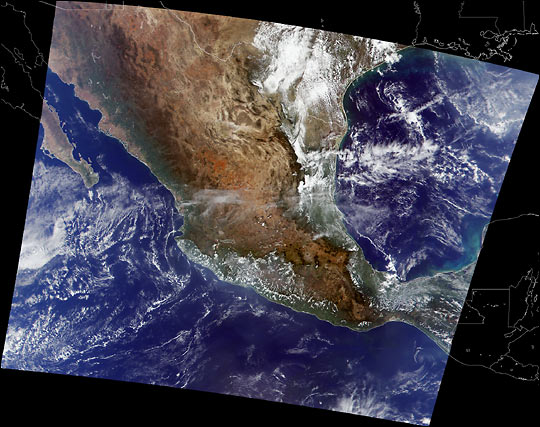 This true-color image of Mexico was acquired by the Moderate-resolution Imaging Spectroradiometer (MODIS), flying aboard NASA's Terra spacecraft. In areal extent, Mexico is the third largest country on the continent of North America (not counting Greenland, which is a province of Denmark), comprised of almost 2 million square kilometers (756,000 square miles) of land. Home to roughly 100 million people, Mexico is second only to the United States in population, making it the world's largest Spanish-speaking nation.

To the north, Mexico shares its border with the United States—a line that runs some 3,100 kilometers (1,900 miles) east to west. About half of this border is defined by the Rio Grande, which runs southeast to the Gulf of Mexico (partially obscured by clouds in this image) and marks the dividing line between Texas and Mexico. Toward the upper left (northwest) corner of this image is the Baja California peninsula, which provides the western land boundary for the Gulf of California.

Toward the northwestern side of the Mexican mainland, you can see the Sierra Madre Occidental Mountains (brownish pixels) running southeast toward Lake Chapala and the city of Guadalajara. About 400 km (250 miles) east and slightly south of Lake Chapala is the capital, Mexico City. Extending northward from Mexico City is the Sierra Madre Oriental Mountains, the irregular line of brownish pixels that seem to frame the western edges of the bright white cumulus clouds in this image. Between these two large mountain ranges is a large, relatively dry highland region.

To the south, Mexico shares borders with Guatemala and Belize, both of which are located south of Mexico's Yucatan Peninsula.