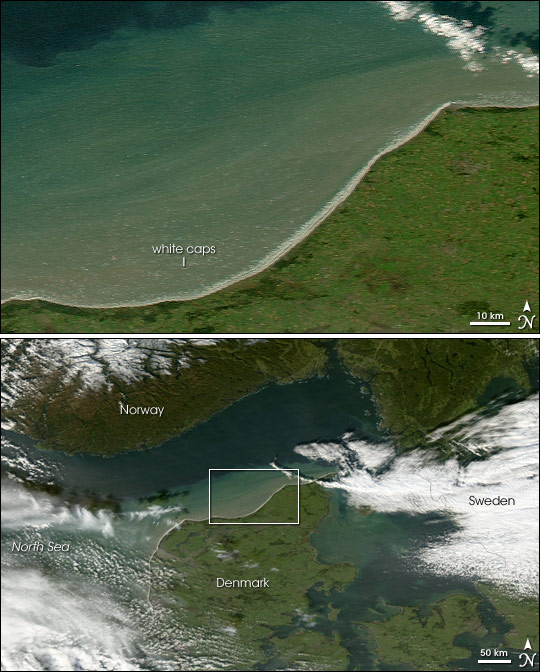 Stormy weather over the North Sea is not uncommon, and so the powerful winds that swept over the European ocean basin on October 27, 2006, were not extraordinary. Winds gusting to hurricane force raged over the sea for several hours, and by the time that the Moderate Resolution Imaging Spectroradiometer (MODIS) on NASA’s Aqua satellite flew over at 1:00 p.m. local time, the sea had turned a foamy, white-flecked green off the shore of Denmark. Westerly winds were driving waves into shore, creating a fringe of white where waves crashed onto the beach. In the image, glimmers of white glint in the murky waters offshore where waves break over the shallow continental shelf. The violent sea churned up clouds of sediment, giving the water the brown and green color seen here. Clearer, deep water farther north is nearly black, by contrast.

According to the BBC, a Scottish trawler with four men aboard was lost in the storm, but October 27 was just the beginning of bad weather on the North Sea. On November 1, a Swedish ship sank, killing one, and an oil platform carrying 75 people was set adrift when it broke free from the tug towing it in strong winds and heavy seas, said the BBC. The November 1 storm sent a surge of sea water into the Netherlands (west of Denmark), where it stranded a herd of about 100 horses in a wilderness area, reported CNN. On land, the autumn storm knocked out power and stopped transport throughout Northern Europe.

You can download a 250-meter-resolution KMZ file of Northern Europe for use with Google Earth.