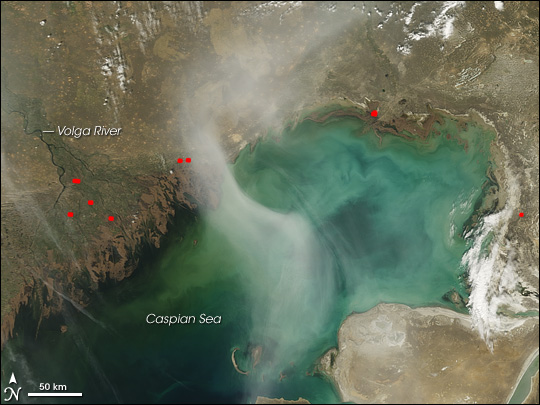 A hazy plume drifted over the northern end of the Caspian Sea in early April 2008. The Moderate Resolution Imaging Spectroradiometer (MODIS) on NASA’s Terra satellite took this picture on April 12, 2008. This image shows the plume curving over the water’s surface. Underneath the plume, much of the water appears blue-green, thanks to the Sea’s shallow northern depths. This part of the Caspian Sea has an average depth of just 4 to 8 meters (13 to 26 feet). Farther south, the deeper water is dark blue.

The translucent plume swirling over the water contrasts with the nearby opaque white clouds. The plume might result partly from smoke from springtime agricultural fires in farmland north of the sea. Red hotspots dot the shores of the lake, a faint echo of the more intense and widespread fires to the north and east. According to Joseph Prospero, Professor of Marine and Atmospheric Chemistry at the University of Miami, the plume could be composed of dust, perhaps from recent activity around the Aral Sea.

Covering an area of roughly 386,400 square kilometers (149,200 miles), the Caspian Sea is currently the world’s largest salt lake. About 11 million years ago, however, this water body was connected to the world ocean though the Sea of Azov, the Black Sea, and the Mediterranean Sea. Today, the Caspian Sea is fed by the Ural, Terek, and Volga Rivers. The sediment-laden northern shores of the Caspian Sea sit well below sea level, and include swamps in the northeast, and small sand seas in the northwest.