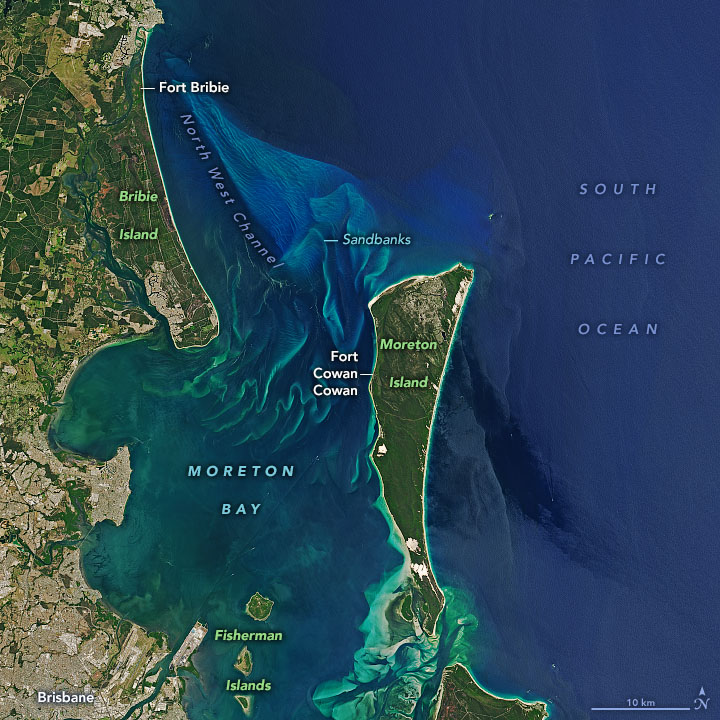 Along the Australian coast near Brisbane, the Moreton Bay area is known for its clear blue waters, vast sand banks, and diverse wildlife. But eight decades ago, it had a less placid existence as a major coastal defense port during World War II.

In the 1940s, Moreton Bay provided a direct Pacific passage for allies and enemies to approach Brisbane. The Queensland government thus strategically placed defense stations around Moreton Bay, and ships could not enter without undergoing an inspection by the Australian navy. Enemies and unidentified vessels were gunned or bombed.

The natural-color image above shows the northern entry into Moreton Bay as observed on November 6, 2019, by the Operational Land Imager (OLI) on Landsat 8. The bay spans about 1,500 square kilometers (600 square miles). During WWII, the North West Channel served as a main shipping passageway and was guarded by Fort Bribie and Fort Cowan Cowan.

Queensland served as a training and support base for Allied Forces in the Pacific theater of World War II. In fact, Brisbane served for a time as headquarters for American General Douglas MacArthur. The city’s population doubled as thousands of soldiers were stationed there. Today, Brisbane is the capital of Queensland and the third most populous city in Australia (more than 2 million residents).

The natural coastal features stand in contrast to the city’s urban landscape. The underwater blue and green curves transecting the North West Channel reveal sand banks and part of Moreton Bay’s complex delta system. The sand banks were formed after sea levels rose about 6,500 years ago. About 30 meters (100 feet) deep, the offshore tidal delta is constantly shaped by currents that tend to be stronger in the northern half of the bay. The southern half is sheltered from those South Pacific currents by Moreton Island. Water near the Brisbane metropolitan area is typically muddy with sediments carried out by rivers.

The bay sits at the convergence of tropical and temperate climates, and thus is home to a diverse array of animals. It contains one of the highest densities of dugongs, a relative of the manatee, along the Australian coast. Some evidence suggests that dugongs were once located throughout the bay, but their habitat became restricted as shorelines became urbanized. Moreton Bay is also home to the endangered loggerhead turtle and many species of whales. It supports up to 25 percent of Australia’s bird species, depending on the season.