The Winds of Hurricane Florence 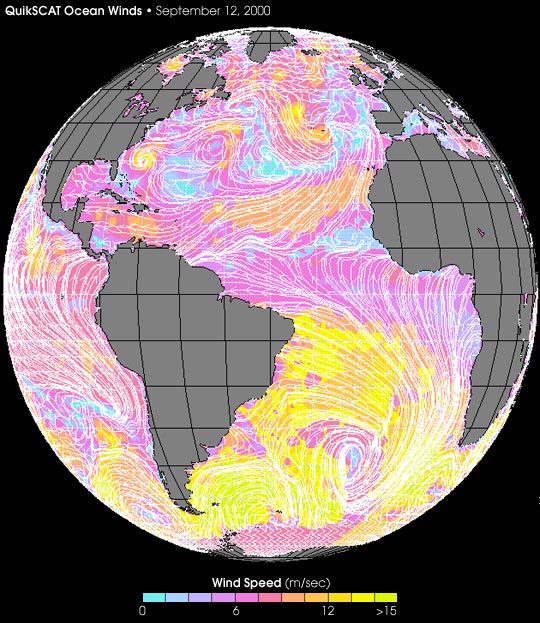 Hurricane Florence stalled several hundred miles off the coast of the Carolinas on September 12, 2000. The storm had sustained winds of just over 75 miles per hour (33.5 meters per second), barely hurricane strength. Although Florence is not likely to strike land, strong riptides caused by the offshore winds killed two swimmers in North Carolina, and a kayaker is missing.

The above image shows data from the QuikSCAT instrument aboard the SeaWinds satellite at 1200 UTC September 12, 2000. Florence is the small spiral of high winds just east of Florida. QuikSCAT measures wind speed over the ocean with radar. Because radar penetrates clouds, QuikSCAT can detect tropical depressions—the weather systems that evolve into typhoons and hurricanes—earlier than traditional weather satellites.

Compare the concentrated winds of Hurricane Florence with the broad areas of high winds that circle Antarctica. The uninterrupted ocean and band of continuous low pressure that surrounds Antarctica is home to high winds, storms, and almost perpetual cloud cover.