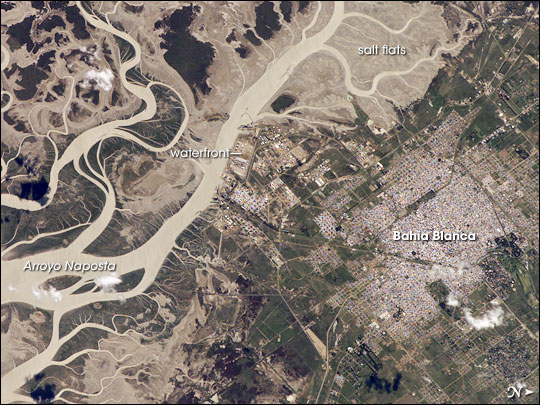 The port city of Bahía Blanca lies almost 600 kilometers southwest of Buenos Aires on the southern rim of the Argentine economic heartland. This small city of 275,000 people is located near the mouth of the Arroyo Naposta. The salt flats (gray) and wetlands bordering this estuary lie mainly on the south side of the river. Twisting, light-colored tidal channels and dark swamps meander through the estuary. The yellow tinge to the water surfaces arises from partial sunglint—light reflected directly back towards the astronaut onboard the International Space Station.

The name Bahía Blanca (“White Bay”) derives from the white color of the salt. The name applies to the major bay (which was noted by Magellan as he probed the coast of South America for a passage to the Pacific Ocean in 1520) and the city at the head of the bay. Highways, airline routes, and pipelines from oil and gas fields to the west and south all converge on Bahía Blanca. The city is a major cultural center and historically has acted as a gateway for immigration. Higher ground on the north side of the estuary affords stable ground for the growth of the city and for intensive agriculture, a mainstay of the Argentine economy. The city sits back from the waterfront, where an industrial park, a petrochemical center, and dockyards are located.

The featured astronaut photograph ISS014-E-5615 was acquired October 14, 2006, with a Kodak 760C digital camera using a 400 mm lens, and is provided by the ISS Crew Earth Observations experiment and the Image Science & Analysis Laboratory, Johnson Space Center. The International Space Station Program supports the laboratory to help astronauts take pictures of Earth that will be of the greatest value to scientists and the public, and to make those images freely available on the Internet. Additional images taken by astronauts and cosmonauts can be viewed at the NASA/JSC Gateway to Astronaut Photography of Earth.