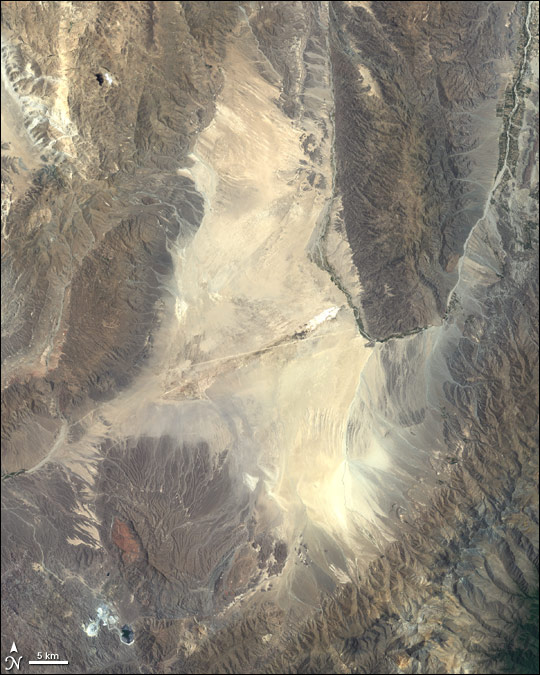 On December 1, 2001, the Enhanced Thematic Mapper on NASA’s Landsat 7 satellite took this picture of part of the Atacama Desert. On the lee side of the Andes, away from prevailing winds and precipitation-making weather, reside salt pans—vast expanses of salt-covered soil. This image shows one such salt pan, Bolton de Pipanaco, tens of kilometers long. Besides the pale color of the salt pan, other features in this photo give clues to the region’s aridity. The sharp ridges around the salt pan appear in shades of beige and brown, indicating land that supports little vegetation. Two small water bodies appear in this image, one in the northwest and the other in the southwest.

The salt plains of the Atacama Desert were once underwater, and research at Cornell University deduced that 15,000 years ago, the salt pans were great salt lakes. When a lake has no outlet, the minerals carried into it accumulate, increasing its salinity. If conditions dry out, the lake can evaporate, creating a salt pan. Harsh as this environment is, some plants and animals have adapted to living in it. A species of saltbush in this area concentrates salt in its stems and leaves, crystallizing the excess on its exterior. Rabbit-resembling viscacha rats, able to eat the saltbush, live nowhere else. Able to tolerate saline lakes, flamingoes congregate in this area to dance.

Dry as this area is, it does see the occasional torrent. Summertime monsoons and mountain runoff can inundate the region, but the water does not soak the area enough to erase the vast plains of salt.

You can download a 28.5-meter-resolution KMZ file of Bolton de Pipanco in Argentina, for use with Google Earth.