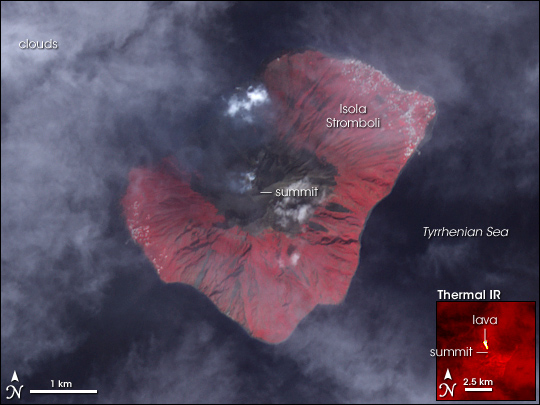 On February 27, 2007, the Stromboli Volcano underwent a strong eruption. According to the BBC News, two new craters opened on the volcano’s summit, producing twin lava flows. One of those lava streams reached the sea the same day, sending up plumes of steam as the scalding lava touched the cool water. Although authorities did not anticipate an evacuation of the volcanic island, they restricted access to high-risk areas. According to Volcano Discovery, seismic activity, including rockfalls, continued several days.

On March 8, 2007, the Advanced Spaceborne Thermal Emission and Reflection Radiometer (ASTER) on NASA’s Terra satellite captured these images. The larger image is an infrared-enhanced, “false-color” image in which bare ground is gray, water is dark blue, and vegetation is red. The inset image is a thermal infrared image showing energy that humans can’t see but can sense as heat. Clouds, possibly mixed with steam, cover the new lava flow in the larger image, but in the inset, the hot flow makes a yellow glow northwest of the summit. The dark flow down the northwest side of the volcano separates the two areas of human settlement seen in this image. The towns of Piscita, Ficogrande, San Vincenzo, and Scari form the bright silver dots on the northeastern shore, while Ginostra is the small town on the western shore.

Stromboli is a stratovolcano composed of alternating layers of hardened ash, lava, and volcanic rocks. Strong eruptions have been recorded at the volcano for more than 1,000 years. In 2002, a major eruption caused a small tsunami and damaged Stromboli Village on the north side of the island.

Eruptions at Stromboli are not unusual. In fact, mild explosions and glowing lava flows are so frequent that the volcano has earned the name “Lighthouse of the Mediterranean,” says the Smithsonian’s Global Volcanism Program. The island of Stromboli is the tip of a massive underwater volcano. The island grows as the volcano continues to pump out fresh lava. As of March 6, the ongoing eruption had added a new 200-meter-wide delta that stretches 50-100 meters into the ocean, said Volcano Discovery.

You can download a 15-meter-resolution KMZ file of Stromboli for use with Google Earth.