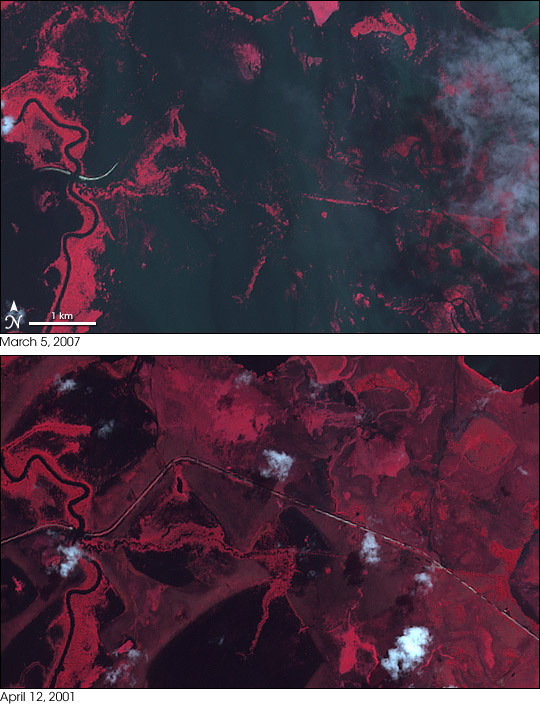 Heavy rains across South America created a flood disaster across central Bolivia in late February and early March 2007. More than 40 people had been killed in the flooding, which also drove tens of thousands form their homes. Food crops and livestock were destroyed, and the threat of water-borne diseases such as dengue fever, malaria, and tetanus escalated, causing the government to declare a national disaster in the eastern part of the country.

This pair of images from the Advanced Spaceborne Thermal Emission and Reflection Radiometer (ASTER) on NASA’s Terra satellite shows dramatic flooding west of the small city of Trinidad, which is located in Beni Department. On March 5, 2007 (top), the city (hidden by cloud just outside the right edge of the scene) was almost completely cut off from the outside world by pools of flood water, which appear dark blue (or nearly black). The images are made with a combination of visible and infrared light observed by ASTER. In this type of image, vegetation is red, bare ground, such as the road that cuts across the images, is tan, and clouds are bluish-white. On March 5, the main road into Trinidad was completely underwater.

The bottom image provided for comparison shows the same area on April 12, 2001. The large pools of water visible on that day indicate that the area is prone to flooding in the rainy season. However, the floods of 2007 were exceptional. More than 30 percent of the population of Beni Department had been affected by the flooding, including more than 14,000 people forced into emergency shelters. A wider-area image of the floods around Trinidad was captured by the Moderate Resolution Imaging Spectroradiometer (MODIS) on NASA’s Aqua satellite in late February. Similar problems were occurring across Bolivia and other parts of South America.

You can also download a 15-meter-resolution KMZ file of the floods on March 5, 2007, for use with Google Earth.

By the time the Advanced Spaceborne Thermal Emission and Reflection Radiometer (ASTER) on NASA’s Terra satellite passed over Des Moines, Iowa, on June 29, 2008, and captured this image, the floods that had struck the city in mid-June when an aging levee failed were no longer apparent in the city itself. However, downstream (southeast) of the city, the flooding remained dramatic.