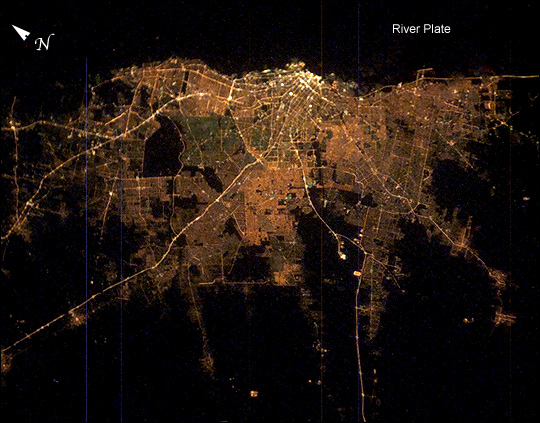 Buenos Aires is one of the larger cities seen by orbiting crews. Twelve million people, almost one third of all Argentines, live in this city, often called the “Paris of the South.” Taken very early on the morning of Saturday, February 8, 2003, from the International Space Station with the handheld eclectronic still camera, this remarkably clear image shows the lights of Argentina’s capital city.

Brightness of the lights exactly represents the density of the urban population, which declines all the way to the blackness of the farmlands that surround the city. The brightest area is the old part of the city centered on the port and the presidential palace, the Casa Rosada. The blackest part of the scene is the River Plate, the great estuary of the Atlantic Ocean on which this port city is located.

The widest city thoroughfare in the world—the Avenida 9 de Julio with four major roads running parallel, separated by grassy swards—is the brightest line in the downtown cluster. It appears as the longest north-south strip just inland of the port. Four major highways can be seen diverging from the city center. These highways may be more visible due to the well-known late-night traffic of weekend Buenos Aires. The inner part of Buenos Aires is the Federal Capital district, outlined by the great boulevard, Avenida General Paz. The straight segments of this boulevard angle around the north and west sides of the city.

Astronaut photograph ISS006-E-24987 was taken February 8, 2003, with an Electronic Still Camera and is provided by the Earth Sciences and Image Analysis Laboratory at Johnson Space Center. Additional images taken by astronauts and cosmonauts can be viewed at the NASA-JSC Gateway to Astronaut Photography of Earth.