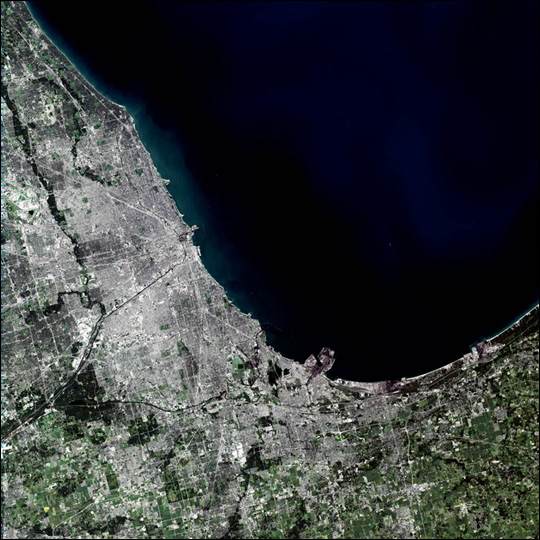 Despite being named after the Algonquian word for skunk, Chicago is one of America’s most thriving and spectacular cities. Spanning 22 miles along the southwest shore of Lake Michigan, the city itself holds nearly 2.9 million people and sits in the center of a metropolitan area containing more than 8 million.

John Kinzie founded the city after buying a trading post from the French on Lake Michigan in 1673. The city was first incorporated in 1837 and grew to encompass an area of four square miles before being consumed in 1871 by the Great Chicago Fire. Fortunately, the residents stayed on after the fire and rebuilt the city out of brick and steel instead of wood. Thanks in part to its strategic location on Lake Michigan and a railroad strike in nearby St. Louis in the early twentieth century, Chicago grew to become the third largest city in the United States.

This simulated-color scene was acquired by the Landsat 7 Enhanced Thematic Mapper plus (ETM+) on September 14, 2001. Looking at the image, one can make out some of Chicago’s famous sites. The long black line coming into the center of the city from the southeast is the Chicago Sanitary and Ship Canal. In the center of the city, just right of where the canal banks north to become the Chicago River, sits a small pier on Lake Michigan, perpendicular to the city, known as Meigs Field. Just to the left of the pier is Soldier Field. Scanning north of Miegs Field, another pier juts out onto the lake. This is Navy Pier. Though it cannot be made out in the image, the Water Tower District and the John Hancock Building sit between Navy Pier and the Chicago River. South of this area is downtown Chicago and the Sears Tower.