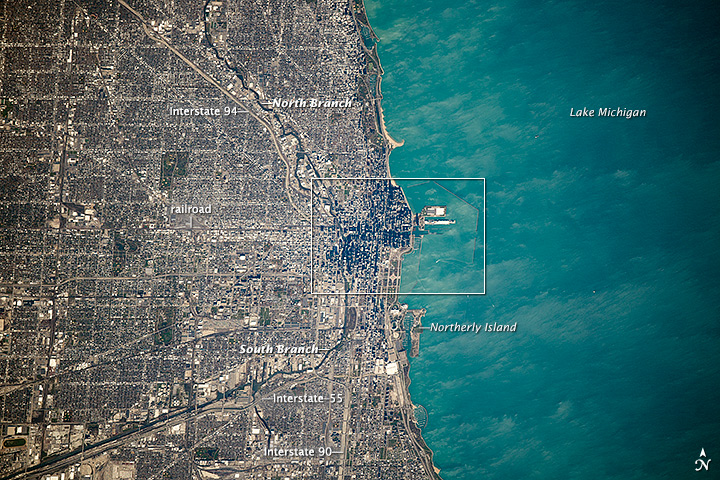 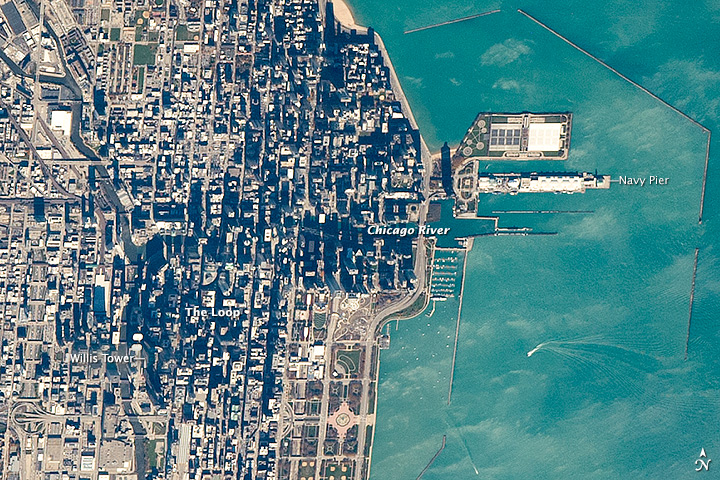 These wide and close-up views of Chicago and 26 kilometers (16 miles) of the Lake Michigan shoreline were captured from the International Space Station. They show some of the natural features that have governed the growth of the city.

Chicago’s center—known as the Loop—lies at the mouth of the Chicago River. The location was ideal for settlement about two centuries ago because it was a point where lake and river traffic converged. The Navy Pier was built in 1916 at this transportation node primarily as a cargo facility for Great Lakes freighters. The city center still occupies the same location nearly two hundred years later. The Loop is distinctly darker when viewed from orbit because high-rise buildings cast much more shadow than low buildings in the surrounding neighborhoods.

Modern highways (I-94 and I-55) are aligned toward the city center, following older transportation routes that ran along the banks of the North and South Branches of the Chicago River. Those branches are still used by barge traffic. Railroads also converge on the city center.

Residential and business land uses compete with the transport functions. For example, Meigs Field was a small downtown airport located on Northerly Island. The airport was bulldozed in 2003 to make way for a city waterfront park.

Astronaut photograph ISS041-E-103791 was acquired on October 28, 2014, with a Nikon D4 digital camera using an 800 millimeter lens, and is provided by the ISS Crew Earth Observations Facility and the Earth Science and Remote Sensing Unit, Johnson Space Center. The image was taken by the Expedition 41 crew. It has been cropped and enhanced to improve contrast, and lens artifacts have been removed. The International Space Station Program supports the laboratory as part of the ISS National Lab to help astronauts take pictures of Earth that will be of the greatest value to scientists and the public, and to make those images freely available on the Internet. Additional images taken by astronauts and cosmonauts can be viewed at the NASA/JSC Gateway to Astronaut Photography of Earth. Caption by M. Justin Wilkinson, Jacobs at NASA-JSC. 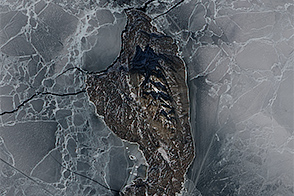