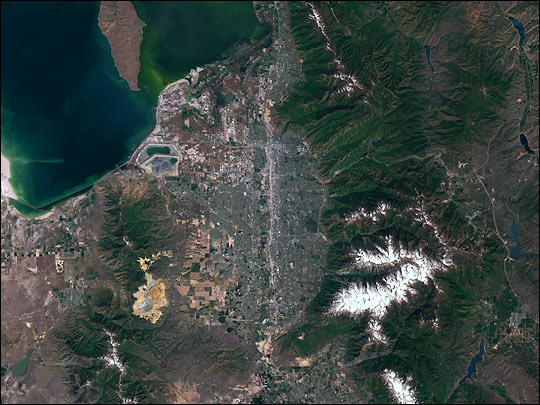 Salt Lake City, Utah, will host the 2002 Winter Olympic Games. The city is located on the southeastern shore of the Great Salt Lake and sits to the west of the Wasatch Mountains, which rise more than 3,500 meters (10,000 feet) above sea level. The city was first settled in 1847 by pioneers seeking relief from religious persecution. Today Salt Lake City, the capital of Utah, is home to more than 170,000 residents.

This true-color image of Salt Lake City was acquired by the Enhanced Thematic Mapper Plus (ETM+), flying aboard Landsat 7, on May 26, 2000. The southeastern tip of the Great Salt Lake is visible in the upper left of the image. The furrowed green and brown landscape running north-south is a portion of the Wasatch Mountains, some of which are snow-capped (white pixels). The greyish pixels in the center of the image show the developed areas of the city. A number of water reservoirs can be seen east of the mountain range. Salt Lake City International Airport is visible on the northwestern edge of the city. About 20 miles south of the airport is the Bingham Canyon Copper Mine (tan pixels), the world's largest open pit excavation.