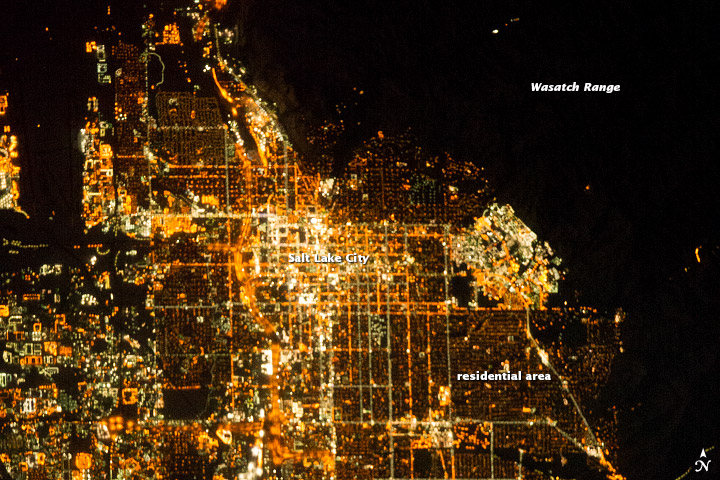 The Salt Lake City metropolitan area is located along the western front of the Wasatch Range in northern Utah. The city is known as “the crossroads of the West,” as the headquarters of the Church of Jesus Christ of Latter-day Saints (known informally as the Mormon Church), and as the state capital of Utah. Salt Lake City was founded in 1847 by Brigham Young, together with other followers of the Mormon faith. The city and surrounding urban areas is home to more than 2 million people, approximately 80 percent of the population of the state.

Viewed at night from the vantage point of the International Space Station, the regular north-south and east-west layout of street grids typical of western U.S. cities is clearly visible. Both the color of the city lights and their density provide clues to the character of the urban fabric. Yellow-gold lights generally indicate major roadways, such as Interstate Highway 15, which passes through the center of the metropolitan area. Bright white clusters are associated with city centers, and commercial and industrial areas. Residential and suburban areas are recognizable as diffuse and relatively dim lighting.

The Wasatch Range to the east is largely dark, as are several large urban parks and golf courses located within the illuminated urban areas.

Astronaut photograph ISS038-E-16506 was acquired on December 12, 2013, with a Nikon D3S digital camera using an effective 600 millimeter lens, and is provided by the ISS Crew Earth Observations experiment and Image Science & Analysis Laboratory, Johnson Space Center. The image was taken by the Expedition 38 crew. It has been cropped and enhanced to improve contrast, and lens artifacts have been removed. The International Space Station Program supports the laboratory as part of the ISS National Lab to help astronauts take pictures of Earth that will be of the greatest value to scientists and the public, and to make those images freely available on the Internet. Additional images taken by astronauts and cosmonauts can be viewed at the NASA/JSC Gateway to Astronaut Photography of Earth. Caption by William L. Stefanov, Jacobs at NASA-JSC.