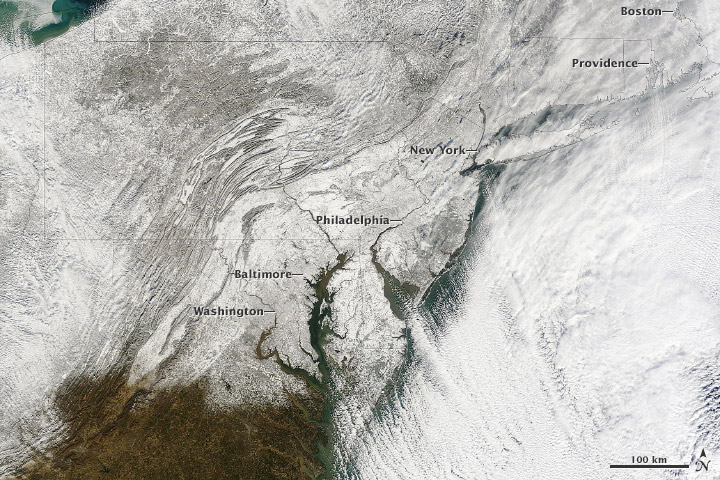 The first winter storm of 2014 swept across the northeastern United States on January 1–3, bringing as much as 24 inches (61 centimeters) of snow to the hardest hit areas. The center of the storm was over the North Atlantic Ocean when the Moderate Resolution Imaging Spectroradiometer (MODIS) on NASA’s Terra satellite acquired this image at 10:55 a.m. Eastern Time on January 3. Lines of clouds over the ocean indicate that strong winds were blowing from the north toward the center of the low-pressure system. The winds pushed the clouds away, leaving a clear view of fresh snow across most of the Northeast.

By the afternoon of January 3, snowfall totals ranged between 0.2 inches (0.5 centimeters) along the southern edge of the storm to nearly 24 inches in northern Massachusetts, according to the National Weather Service. The storm closed schools, roads, and airports, and more than 2,000 flights were cancelled on both January 2 and 3, according to news reports.

While the clear skies provided a view of the fresh snow from space, they were accompanied by extremely cold temperatures. Clouds radiate heat back to the ground, while clear skies allow heat to escape into space. An Arctic blast is forecast to move across the Mid-Atlantic and Northeast, with temperatures 20 to 30 degrees below normal, warned the National Weather Service.