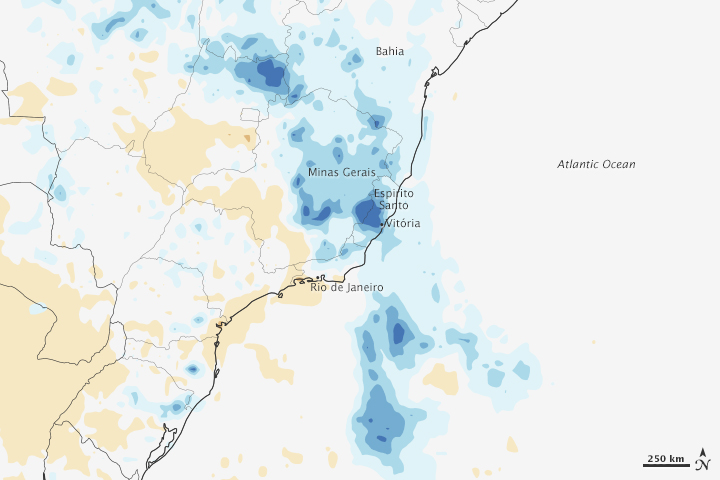 December 2013 was an extremely wet month for at least three states in southeastern Brazil: Espirito Santo, Minas Gerais, and Bahia. By December 27, at least seven cities set new records for the most rain received in a single month, according to a preliminary analysis conducted by Márcia Seabra, chief meteorologist in the analysis and forecast division of Brazil’s National Meteorology Institute (INMET). Aimores, Minas Gerais, received 852.4 millimeters (32.8 inches) of rain from December 1–27, more than 400 percent of the average December rainfall. The previous record, set in November 2010, was 350.4 mm (13.8 in).

Satellite-based measurements of precipitation show the wider pattern throughout the states. The map above compares December 2103 rainfall rates with the average December rainfall between 1998 and 2012. Blue areas show where rainfall in 2013 was much more intense (more rain fell daily) than average. The measurements come from the Real-Time TRMM Multi-satellite Precipitation Analysis, which is based on data from the Tropical Rainfall Measuring Mission (TRMM) satellite.

This event is extreme, but the pattern is similar to one that appears in TRMM observations of Brazil during the Southern Hemisphere summer, says George Huffman, a scientist at NASA’s Goddard Space Flight Center. Usually the area of heavy rain is farther south or west, and the rainy region over the ocean is much smaller. TRMM observations in December 2013 also correspond well with a map of ground-based measurements from the region. (To see December total rain, select “precipitação total” (total precipitation) in the first field under “dados mensais“ (monthly data), then select Dez 2013.)

The extreme rain resulted in widespread flooding and landslides that left 45 people dead, some 70,000 evacuated, and many communities isolated by the collapse of roads, according to the UN Office for the Coordination of Humanitarian Affairs. The cost of infrastructure repairs in Espirito Santo is expected to reach $540 million Reals (about $227 million U.S.), according to the state government.

Four of the record-setting cities listed above (including Aimores) lie along the Doce River, which flooded (see image here) as a result of the intense rain.