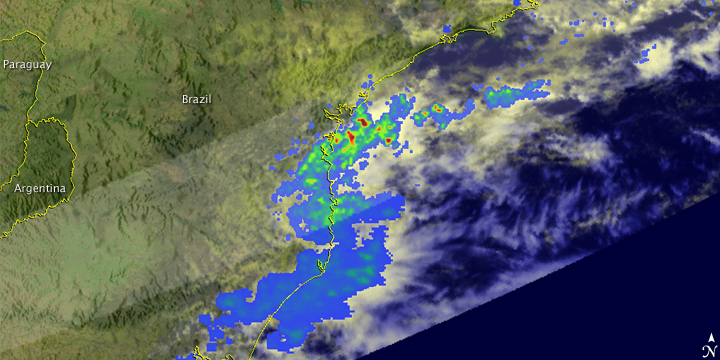 As of November 26, 2008, at least 86 people had died in southeastern Brazil as a result of flooding and landslides brought about by a period of heavy rain, reported CNN. The hardest hit area was the southern Brazilian state of Santa Catarina. Most of the flood-inducing rain fell between November 20 and November 23, 2008, although the stage was set for flooding by significant rainfall in the region over the previous two months.

This image, taken by the Tropical Rainfall Measuring Mission (TRMM) satellite, shows a snapshot of the storm that caused the flooding. TRMM snapped this image of the rains at 11:50 a.m. local time (13:30 UTC) on November 22, 2008. The image shows the horizontal distribution of rain intensity as seen from above. Areas of intense rainfall (darker reds) are associated with heavier thunderstorms over and just off the coast. A broad area of light to moderate rain (green and blue areas) extends well inland. Located in the subtropics, southern Brazil’s rainiest months on average occur during the Southern Hemisphere summer.

Rain rates in a few cloud bands on the eastern side of Typhoon Dolphin approached 50 millimeters per hour (red) when the storm was observed by the Tropical Rainfall Measuring Mission satellite on December 14, 2008.