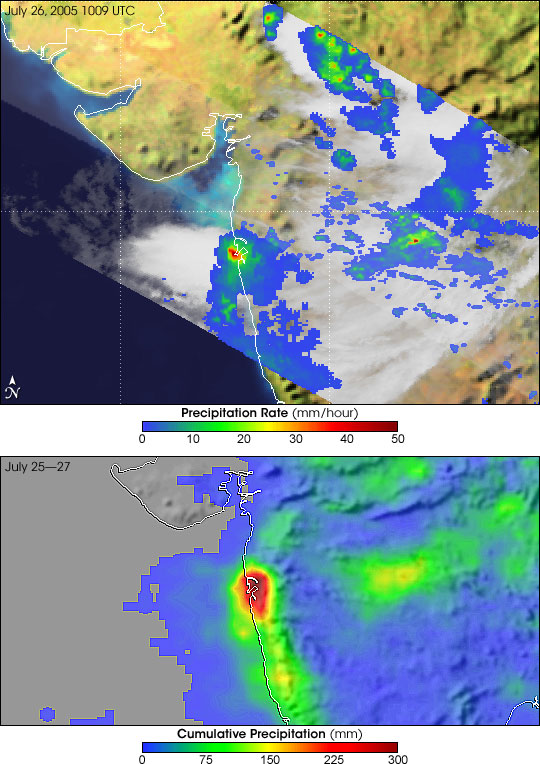 India’s financial capital, Mumbai (formerly Bombay), received a record-breaking 942 millimeters (37.1 inches) of rain in a twenty-four hour period on Tuesday, July 26, 2005. India’s previous all-time single-day record of 838 mm (33 inches) was set in 1912. The heavy monsoon rain triggered deadly floods, which have claimed more than 500 lives in the country’s western Maharashtra state, with 273 fatalities in Mumbai alone, as of July 28. Monsoon-related flooding is not unusual in the summer when the heating landmass generates winds that pull warm, moisture-laden air over the Indian subcontinent, but Tuesday’s rains were unusual even for the summer monsoon.

The Tropical Rainfall Measuring Mission (TRMM) satellite captured the top image of the rain over Mumbai at 3:39 p.m., local time, (10:09 UTC) on July 26, 2005. The image shows rain intensity as measured by TRMM’s sensors, with the heaviest rainfall in dark red and lighter rainfall in blue. A dark red area of heavy precipitation sits directly over Mumbai, revealing rain rates as high as 50 millimeters per hour immediately around the city.

The lower image records rainfall accumulations between July 25 and July 27. As in the top image, the dark red area of heavy rainfall (indicating a foot of rain) is concentrated right over Mumbai. Both images show just how localized extreme rainfall can be.