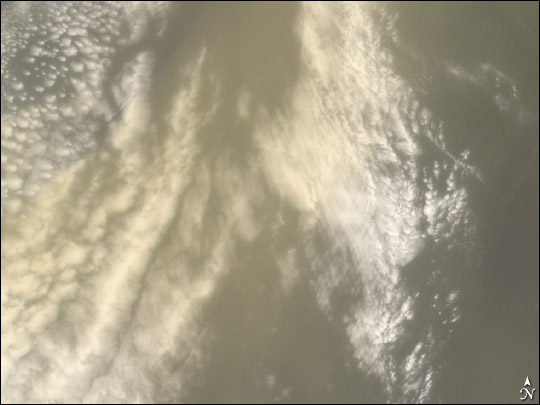 A huge dust cloud blown westward from the Algerian desert wafted over the southeastern United States during the final week of July 2005. The cloud, about the width of the United States, was expected to produce dramatic sunsets and possibly leave a light coating of red-brown dust on vehicles from Florida to Texas. This image was captured by the Jet Propulsion Laboratory’s Multi-angle Imaging SpectroRadiometer (MISR) aboard the Terra satellite on July 20, 2005. It provides a detailed view of the yellow dust over a band of clouds just off the west coast of Africa near Mauritania and Senegal. The large image covers about 1,800 kilometers (1,200 miles) north-south, and 400 kilometers (260 miles) east-west.

MISR, which views Earth at nine different angles in four wavelengths, can derive the amount, size and shape of airborne particles. This means it can distinguish desert dust, by far the most common non-spherical atmospheric aerosol, from pollution and forest fire particles, which are typically spherical. This image was taken by MISR’s 26-degree forward-viewing camera.

The Multi-angle Imaging SpectroRadiometer observes the day-lit Earth continuously from pole to pole, seeing the entire globe about once per week. MISR was built and is managed by NASA’s Jet Propulsion Laboratory, Pasadena, CA, for NASA’s Office of Earth Science, Washington, DC. The Terra satellite is managed by NASA’s Goddard Space Flight Center, Greenbelt, MD. JPL is a division of the California Institute of Technology.

Airborne Sea of Dust over China