Airborne Sea of Dust over China 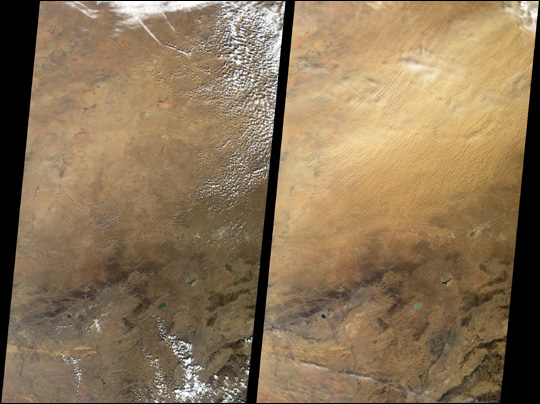 Dust covered northern China in the last week of March during some of the worst dust storms to hit the region in a decade. The dust obscuring China’s Inner Mongolian and Shanxi Provinces on March 24, 2002, is compared with a relatively clear day (October 31, 2001) in these images from the Multi-angle Imaging SpectroRadiometer’s vertical-viewing (nadir) camera aboard NASA’s Terra satellite. Each image represents an area of about 380 by 630 kilometers (236 by 391 miles).

In the image from late March, shown on the right, wave patterns in the yellowish cloud liken the storm to an airborne ocean of dust. The veil of particulates obscures features on the surface north of the Yellow River (visible in the lower left). The area shown lies near the edge of the Gobi desert, a few hundred kilometers, or miles, west of Beijing. Dust originates from the desert and travels east across northern China toward the Pacific Ocean. For especially severe storms, fine particles can travel as far as North America.

Dust over the Pacific