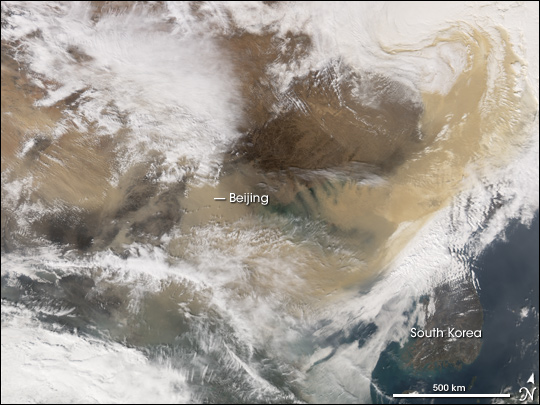 According to Chinese news reports, a dust storm had been predicted for northern and central China between March 9 and March 12, 2006, and the prediction proved correct. On March 10, a dust storm struck the region of Beijing. The Moderate Resolution Imaging Spectroradiometer (MODIS) flying onboard the Aqua satellite captured this image on March 10, 2006.

In this image, dust mingles with clouds over northeastern China and the Korean Peninsula. The dust cloud appears as a pale tan, slightly lighter than the underlying landscape. Dust clouds obscure the view of the city of Beijing. According to Reuters News Service, the dust resulted in a rare phenomenon in South Korea: yellow snow. Snow laced with dust can pose a health hazard, and the Korean weather bureau issued a dust warning. In northeastern China and Mongolia, the storm posed the usual hazards to respiratory tracts and eyes.

The Gobi Desert was the likely source of at least some of this dust. Dust storms are far from rare in the Gobi Desert in March. Dust storms in March and April can actually exceed the number of storms for all other months combined. This storm resulted from cold air from Siberia combined with low pressure from Mongolia.

Numerous dust storms whipped across China in the spring of 2006. The latest image shows dust and haze over northeastern China in early May.