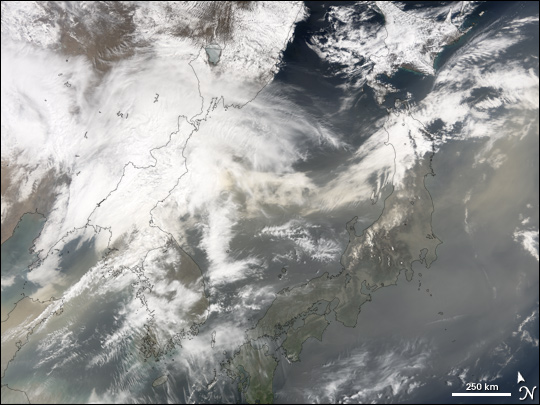 Something more than clouds hovered over Japan on April 18, 2006. Dust filled the skies as well. The dust traveled to the island nation from the Gobi Desert. The Moderate Resolution Imaging Spectroradiometer (MODIS) flying onboard the Terra satellite took this picture on April 18. In this image, the eastward-moving, tan dust mingles with white clouds. An especially thick plume of dust heads toward the Korean Peninsula and the island of Japan from the west coast of China.

The same day this picture was taken, Japan’s Meteorological Agency announced that the dust storm reached Tokyo, the first such weather event in that city in six years. The agency predicted reduced visibility but no health hazards. Research results published in 2005, however, suggested that dust storms may carry bacteria from China to Japan.

If the Japanese hoped others could understand the frustrations this dust storm caused, they needed to look no further than Beijing. Spring is the season for Gobi Dust storms, but this storm appeared to be unusually hard on China’s citizens. According to news reports, it was the worst in five years, dumping some 300,000 tons of dust on Beijing. It was also the second dust storm to hit that city in a week. According to some reports, Chinese officials planned to seed clouds in hopes of bringing some relief.

In 2005, a Nature paper examined China’s changing environment. Partially worsened by human actions such as overgrazing and grassland degradation, dust storms began to increase in the 20th century. Between AD 300 and 1949, northwestern China saw a dust storm on average every 31 years. After 1990, the average jumped to one such storm per year. According to news reports, at the time this storm hit, the average rate of dust storms for the Beijing region (in northeastern China) was five or six a year. This storm was the eighth to hit the region in 2006.