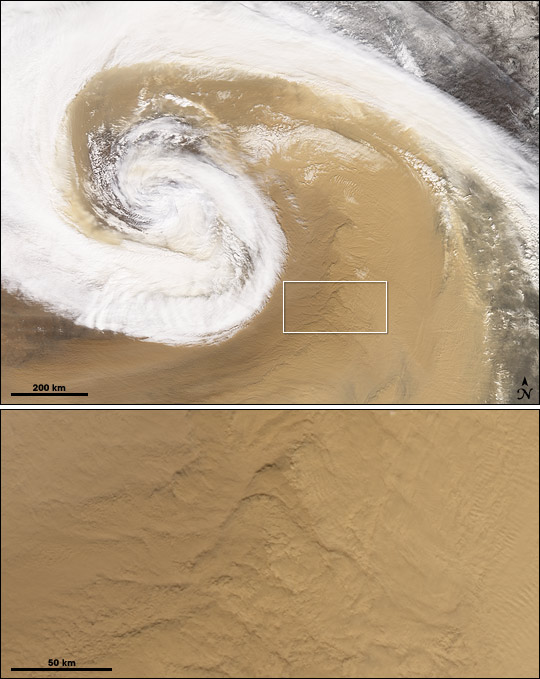 Scientists who study dust storms have long known that Saharan dust can travel all the way across the Atlantic to the Americas. Asian dust, however, must travel much farther to reach the same destination. In April 2001, researchers watched with surprise as dust from an Asian storm crossed the Pacific reaching as far east as the Great Lakes and even Maryland.

An eye-witness to the dust storm, who visited Jilin Province in northeastern China, reported that around 7 a.m. local time on April 7, 2001, the dust blocked enough sunlight to leave the skies as dark as midnight, and reduced visibility to roughly 20 meters (65 feet). The Moderate Resolution Imaging Spectroradiometer (MODIS) on NASA’s Terra satellite captured these images of the dust storm as it swirled over China the same day. The bottom image shows a close-up view of the area outlined in white in the top image.

In early April of 2001 a strong temperate cyclone spun counter-clockwise over China, pushing a wall of dust as it moved. The deep tan dust is not only thick enough to completely hide much of the land surface below, but it almost forms its own topography, with ridges of dust rising up below the clouds, visible in the bottom image.

Besides tracking the dust’s movement, the U.S. Navy Aerosol Analysis and Prediction System (NAAPS) modeled where it would travel and predicted its trans-Pacific journey. To produce the models, NAAPS relied partly on data from NASA’s Sea-viewing Wide Field-of-view Sensor (SeaWiFS) sensor.

The 2001 dust storm that traveled across the Pacific to North America was not likely to be the last. A 2005 paper by Jianguo Liu and Jared Diamond described the increased incidence of dust storms in China. From AD 300 to 1949, China experienced a dust storm on average every 31 years. After 1990, a dust storm occurred almost every year. The authors attributed the increase in such storms partly to deforestation and changes in water usage.

NASA image by Jesse Allen and Robert Simmon, based on data from the MODIS science team.