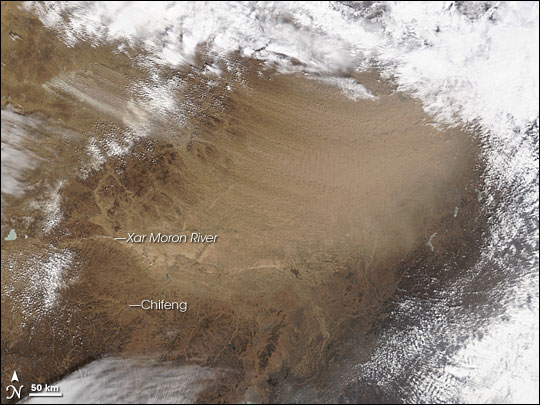 A dust storm struck northwestern China, not far from the Mongolian border, on March 24, 2007. The Moderate Resolution Imaging Spectroradiometer (MODIS) flying onboard the Terra satellite captured this image the same day. In this picture, the dust plume forms a feathery brush over the brown landscape. Source points for the dust storm appear near the base of the mountain range to the west, and the dust moves in a semicircular motion toward the east. West of the storm, clouds appear to move in a similar fashion, and may be driven by the same weather system that stirred up the dust.

You can download a 250-meter-resolution KMZ file of the North China dust storm for use with Google Earth.