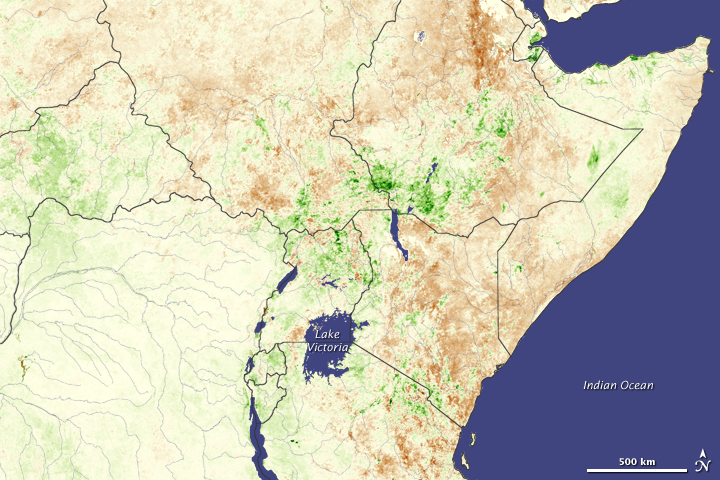 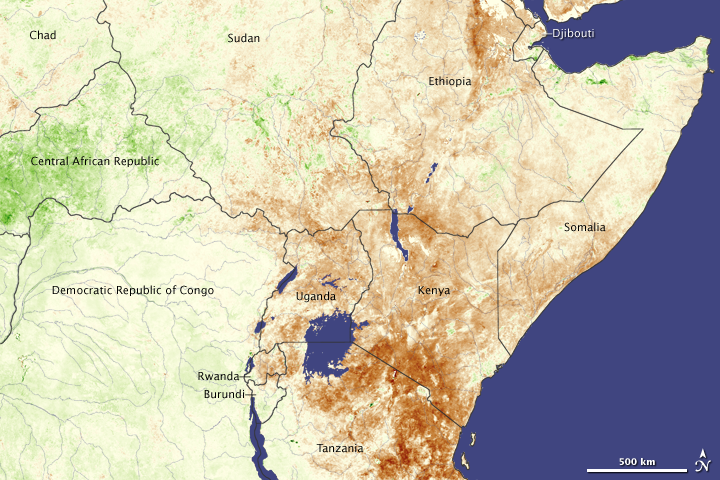 In eastern Africa, most areas experience one of two rainfall patterns. Some places, such as western Kenya, have a single “long rains” season that runs from March until November or December. Other areas, such as eastern Kenya, have two rainy seasons: long rains between March/April and July/August, and “short rains” from October to December or January. In 2005, the long rains were far below normal, and the short rains failed altogether. Much of the region suffered severe drought. Crops and natural vegetation, including grazing land for livestock, withered. Livestock deaths and human food shortages were widespread.

By March 2006, the long rainy season resumed in some locations, but not all. This pair of images reveals the impact of the 2005 drought on vegetation in East Africa using vegetation data from the SPOT satellite. The percent anomaly was calculated by subtracting the average (1998-2006) March vegetation signal from the value for March 2006, and then dividing by the average. Areas where vegetation was much less abundant or healthy than normal are shown in brown, and places where vegetation was robust are shown in green. In February 2006 (bottom image), after the failure of the 2005 short rainy season, vegetation amount and health across a wide swath of the region was far below normal. By March (top), the long rainy season had begun in some places, and the image shows that vegetation had begun to rebound in parts of northern Tanzania, southwestern Kenya, Uganda, Rwanda, and southwestern Ethiopia. But vegetation across large parts of Kenya, Ethiopia, Somalia, and Sudan was still suffering from the effect of drought.

Rains continued to arrive in different locations in early and mid-April 2006, but according to relief organizations, they will not bring an immediate end to the human crisis. The rains can bring temporary, but often damaging, flooding that can elevate disease risk. In addition, the large-scale deaths of livestock among herders and nomads who depend on the animals for food and income will be a hardship for much longer than it takes the vegetation to recover.