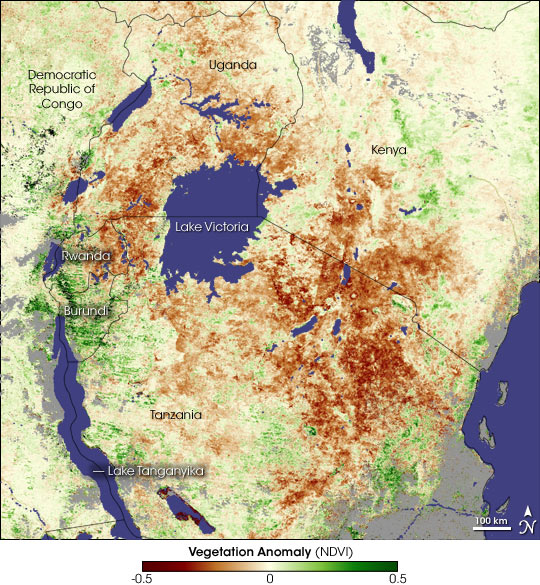 Dry, drought-withered vegetation rings Lake Victoria in this vegetation anomaly image. The image shows large-scale plant health in eastern Africa. Regions that are drier than they were between 2000 and 2004 are brown, while areas with thicker, healthier vegetation are green. As the image illustrates, many countries in eastern Africa have been plunged into drought in recent months. In this region, drought means more than economic loss, for many it means famine.

From Tanzania to Uganda, millions are facing food shortages as the drought wears on. Relief Web reports that up to 30,000 are hungry in northern Tanzania, which has been dry for the past two years. Covered with dark brown, this region is also the most obviously stressed area in the above image. The image also correlates with reports of widespread food shortages in northern Burundi, a country where as many as two million are hungry, and southern Uganda, where 600,000 require food aid. Relief may be in sight, however; by March 23, 2005, the first rains of the rainy season had begun to fall east of Lake Victoria. If the rains continue, the long rainy season could provide the moisture needed to nourish crops during the coming growing season.

The Moderate Resolution Imaging Spectroradiometer (MODIS) on NASA’s Aqua and Terra satellites collected the data to generate this image between February 18 and March 5, 2005, before the rains started.