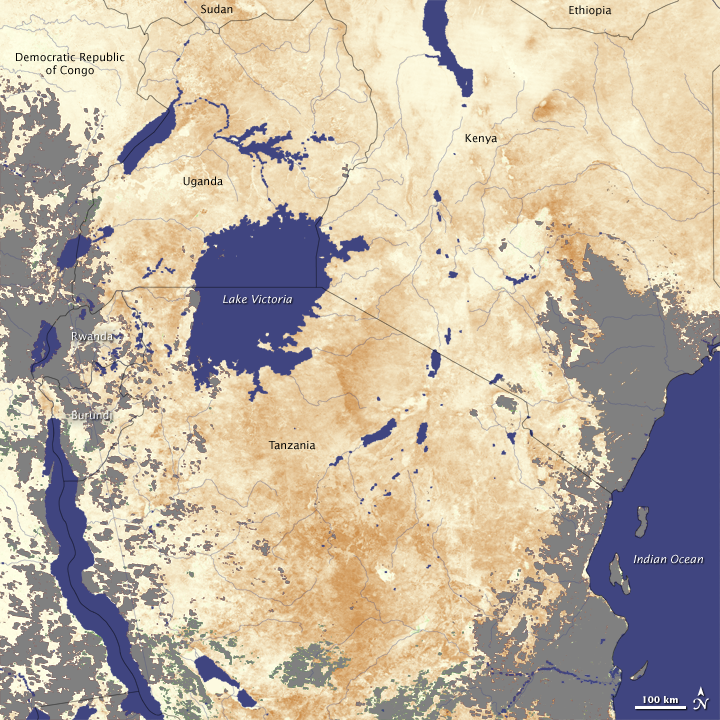 The failure of the short-season rains left large sections of East Africa in severe drought in late 2005 and early 2006. In a normal year, rains fall from March to May during the long rainy season, and from October to December during the short rainy season. The rains recharge lakes and reservoirs and nurture plants from crops and pasture lands to natural vegetation. For East Africa, 2005 was anything but a normal year. The long rainy season produced little rain, and the short rainy season failed altogether. As a result, rainfall totals for the year were only 20-60 percent of normal, depending on the region, reported the Famine Early Warning Network (FEWS NET).

The drought’s impact on vegetation can be seen in this vegetation index image, collected by the Moderate Resolution Imaging Spectroradiometer (MODIS) at the end of the short rainy season. The image shows how well plants were growing between December 19 and January 3 compared to average conditions between 2000 and 2004. The prevalence of deep reddish-brown across the image indicates that plants were growing poorly, if at all, in the dry conditions. The drought area shown in this image circles Lake Victoria in a north-south-oriented oval that stretches from southern Sudan and Ethiopia in the north to Tanzania in the south. Grey areas show where clouds covered the area throughout the composite period.

The impact of the drought has been severe. “This drought has resulted in crop failures, pasture degradation, water shortages, and has raised serious food security concerns for the region,” FEWS NET warned. By the end of January 2006, millions were in need of food aid, particularly pastoralists who depend on rain-fed pasture lands to maintain their livestock. Not all of East Africa has been affected. Kenya (center right) had a bumper harvest in 2005, but little of the crop made its way to the drought-hit pastoral districts of the country.