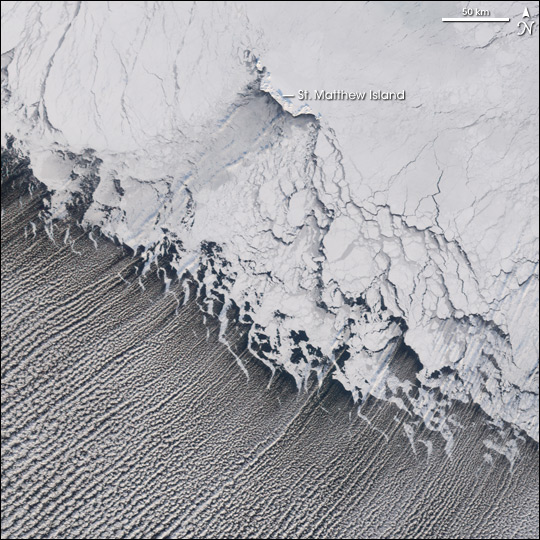 Like the freshly raked white sand of a well-tended Japanese garden, rows of clouds stream over the Bering Sea from the edge of the sea ice. Called cloud streets, these cumulus clouds form when cold air from the ice blows over the open ocean, chilling the moist air. As the temperature drops, water freezes into tiny clouds, which are arranged in neat rows in line with the powerful sweep of the wind. Though some clouds form over the cracking sea ice on the right side of the image, most are over the unfrozen water. The Moderate Resolution Imaging Spectroradiometer (MODIS) on NASA’s Terra satellite acquired this image on January 20, 2006. The next day, cloud streets were still present across the Bering Sea, but had changed location and direction somewhat.

St. Matthew Island sits alone in the Bering Sea between Alaska to the east and Russia to the west. According to an article on the Website of the Alaska Maritime National Wildlife Refuge, St. Matthew Island is the most remote part of Alaska. The nearest village is just over 336 kilometers (about 209 miles) away to the eest, a small village on Nunivat Island. Uninhabited by people, the island is a seabird mecca. Among the species that nest on the island are murres, northern fulmars, and several kinds of auklets, including the parakeet auklet. In this image, the island appears to be holding back a wall of sea ice, which is packed tightly against its northern shore. Mountains cast their shadows onto the white surface below.