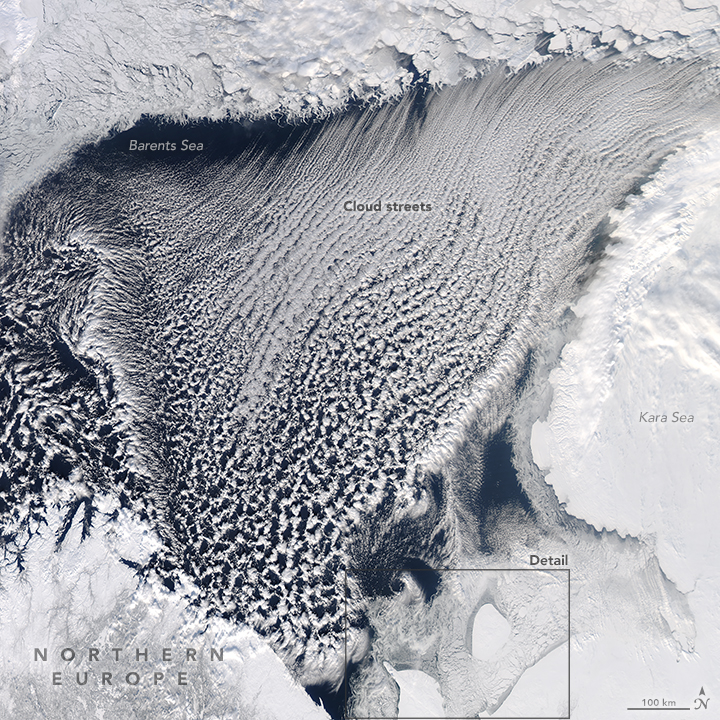 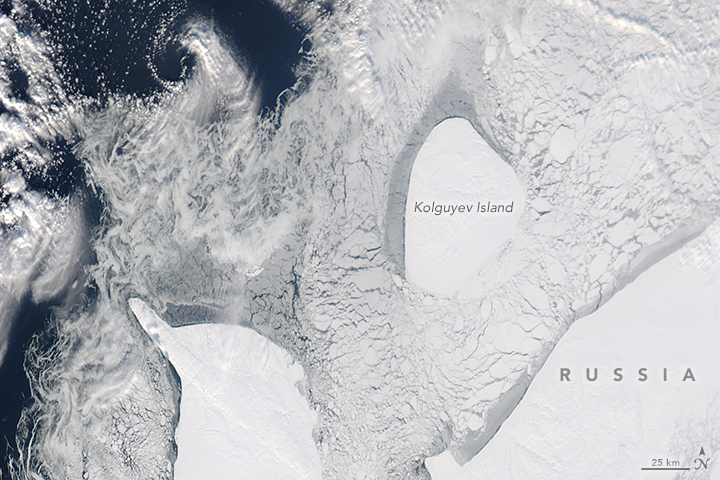 Sea ice in the Arctic Ocean grows each year throughout the fall and winter and reaches its maximum extent sometime between February and April. This year, sea ice peaked on March 17, 2018, at 14.48 million square kilometers (5.59 million square miles), making it the second-lowest maximum on record. There was still enough ice, however, to cool the air and help produce cloud streets—long, parallel bands of cumulus clouds that commonly form this time of year when cold air blows over warmer water.

On March 15, 2018, two days before sea ice reached its maximum extent, the Moderate Resolution Imaging Spectroradiometer (MODIS) on NASA’s Aqua satellite acquired this image of cloud streets over the Barents Sea. According to the National Snow & Ice Data Center, this region had a late spurt of sea ice growth. When this image was acquired, cool air was blowing southward across the sea ice and over the comparatively warmer open water off of northern Europe.

Ultimately, cloud streets are the visible result of nature trying to balance differences in energy. Columns of heated air called thermals rise through the atmosphere, moving heat away from the sea surface. The air masses rise until they hit a warmer air layer (temperature inversion). This layer acts like a lid, causing the rising thermals to roll over and loop back on themselves forming parallel cylinders of rotating air. On the upper side of these cylinders (rising air), clouds form. Along the downward side (descending air), skies are clear.

Notice, too, the variation in sea ice across the Barents and Kara seas. In contrast to the Barents, ice in the Kara Sea (east of the Novaya Zemlya archipelago) is still solid. The second image shows a detailed view of sea ice near Russia. Light gray areas that resemble shadows north of Kolguyev Island are more likely due to sea ice that has been thinned by offshore winds.