Days of heavy rains drenched several watersheds in central and northern Queensland in early March 2018. Following the deluge, NASA satellites collected images of the pulse of water as it flowed south through braided rivers in Australia’s Channel Country, a desert region known for becoming lush with greenery after floods.

The Moderate Resolution Imaging Spectroradiometer (MODIS) on NASA’s Terra and Aqua satellites captured this sequence of six images between March 11 and March 26, 2018. It shows the progress of water (light blue) on the Hamilton, Diamantina, and Thomson Rivers. The images use a combination of infrared and visible light to increase the contrast between water and land.

These three rivers drain from far to the north into basins near the border with South Australia, where water spreads out in large, shallow lakes. The rivers flow south toward the lowest point in Australia—Lake Eyre—partly because coastal mountain ranges block routes to the sea. As of March 27, 2018, flood water on the Diamantina had flowed as far south as Betoota and had begun to trickle into Birdsville, a remote town on the edge of the Simpson Desert.

Northern Queensland is still being hammered by heavy rain. As the remnants of a tropical cyclone passed over the region on March 27, some areas received up to 400 millimeters (15 inches) of rain, according to Australia’s Bureau of Meteorology. 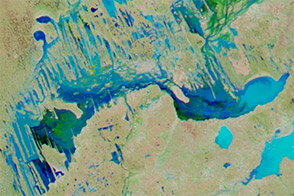