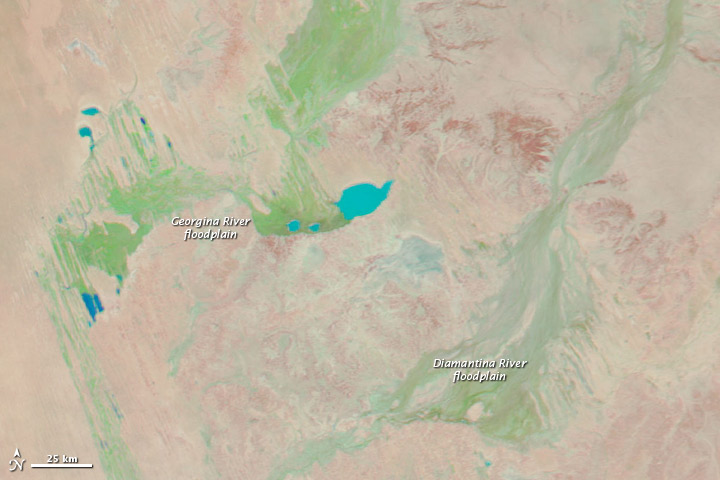 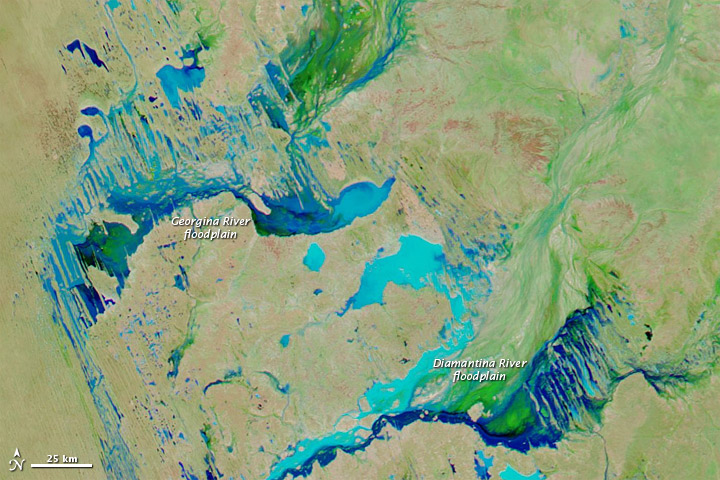 It’s not unusual for a rainy season to transform a landscape, but what’s unusual about Australia’s Channel Country is that the transforming rains often fall hundreds of kilometers away. Like the Okavango Delta of Botswana, the Channel Country is an inland delta. It is fed by rain that falls on the Mitchell Grass Downs to the north. Instead of flowing to the coast, the rivers arising from these grassy plains flow toward the low-elevation Australian interior, sending water over expansive floodplains.

Just about every year brings some seasonal changes to the Channel Country, though not every year brings the same amount of flooding. The Moderate Resolution Imaging Spectroradiometer (MODIS) on NASA’s Aqua satellite captured a dry-season scene on September 26, 2009 (top), and a flooded scene on March 26, 2011 (bottom). These images show floodplains in southwestern Queensland, just west of Australia’s Northern Territory and north of the state of South Australia.

Both images use a combination of visible and infrared light to better distinguish between water and land. Water is blue, and darker blue implies greater water depth. Vegetation is bright green and bare ground in pink-beige. The flooding is significant in March 2011, but the water isn’t high enough to crest many of the linear dunes that run northwest-southeast in this region.

Much of the water in the Georgina and Diamantina River systems results from monsoonal weather systems. Floods in the Channel Country typically happen between November and June, and flooding is especially likely in February or March.

When the Channel Country floods with water that flowed in from elsewhere, the phenomenon is known as a dry flood. Sometimes rain falls locally, but the region is generally arid, with less than 250 millimeters (10 inches) of rain a year. Either way, where the water flows, plants, fish, and waterfowl follow. Dormant plants quickly revive, as indicated by the abundant green in the March 2011 image. Australia’s newly watered interior provides breeding grounds for about 70 bird species, including parrots and pelicans.

The vibrant flood season is fleeting, however, and typically dry conditions quickly return. Some animals don’t survive the return to dry weather, but most leave for lakes, water holes, or coastal regions, bolstering populations in those areas.