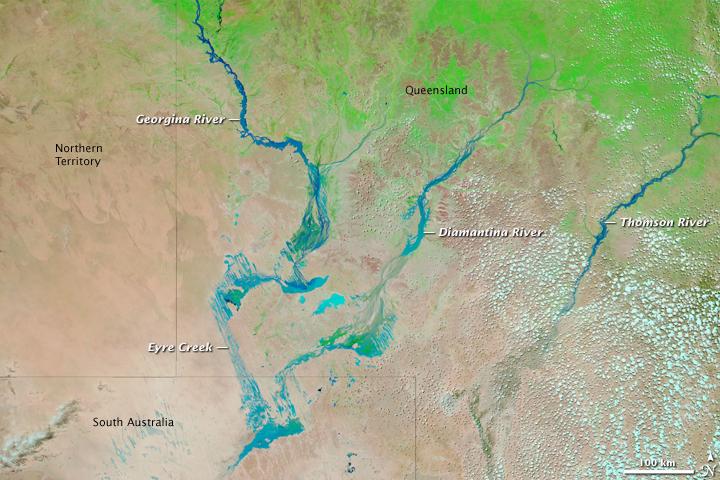 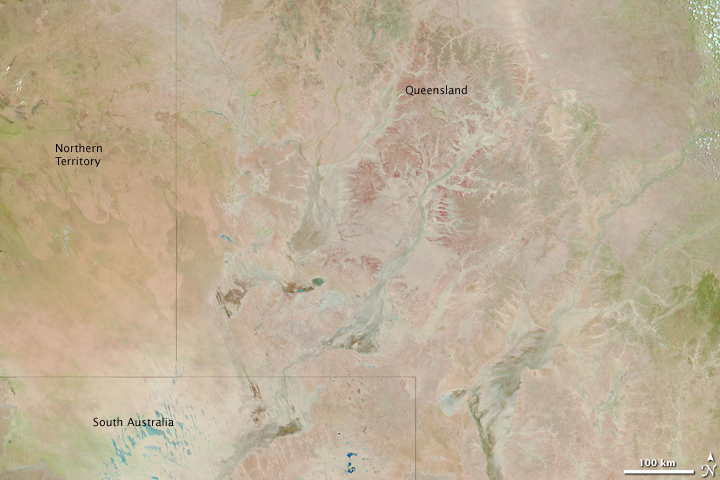 Water flowed through Australia’s Channel Country on February 18, 2009, when the Moderate Resolution Imaging Spectroradiometer (MODIS) on NASA’s Aqua satellite captured the top image. The floods followed weeks of seasonal rain in northern Queensland. As of February 17, floods affected 62 percent of Queensland, killing seven people and leaving hundreds more homeless, and stranding tens of thousands of livestock without food, reported the Associated Press. Though normal, the floods of 2009 were considered to be the worst in three decades, said the AP.

These images show the Georgina, Diamantina, and Thomson/Cooper Creek River systems on February 18, 2009, and December 16, 2008, before the rainy season started. Water is dark blue in these false-color images. The images were made with visible light (light that a human eye can see) and infrared light. The combination increases the contrast between flood water, which tends to be brown, and earth, which is also brown. In this type of image, water is usually black or dark blue. In this case, the water is lighter in color because either dirt colors the water or there is only a thin layer of water over a bright salt pan. Plant-covered land is bright green, and bare or lightly vegetated land is tan-pink.

The Queensland Flood Warning Center reported major flooding on all of the rivers shown in this image. The rivers grow during the wet season, draining Queensland’s interior into the salt flats of South Australia. Eventually, in a rainy year, the flood water will reach Lake Eyre, a vast inland lake that fluctuates in size as it receives water from one of the world’s largest inland drainage basins. Though the floods are damaging, they also bring new life to the desert. The water will rejuvenate seasonal wetlands and sustain plant growth. The bright green tones evident on February 18 show that the seasonal green-up had already started in parts of Queensland.