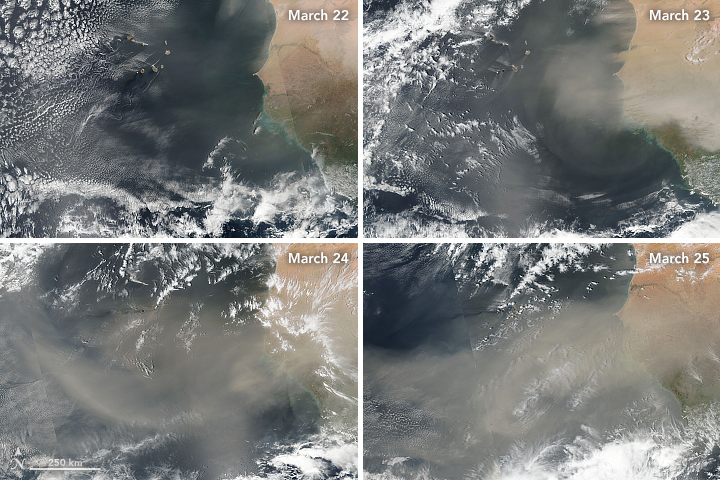 Scientists estimate that winds and storms pick up roughly 180 million tons of dust from the Sahara Desert each year and deposit it in the Atlantic Ocean and on the Americas. In the past week, active weather systems made a big deposit toward the 2018 total, as relentless storms lofted vast plumes of dust for days.

The Visible Infrared Imaging Radiometer Suite (VIIRS) on the Suomi NPP satellite acquired this series of natural-color images from March 22–25, 2018. Strong winds across North and West Africa lifted vast quantities of dust from the Sahara Desert and carried it over the Atlantic Ocean. The dust storm has continued for eight days, as visible in more images from March 26, March 27, March 28, and March 29.

Dust storms can pose breathing problems, create poor visibility, and lead to other health and safety concerns when these aerosols are concentrated near the ground. But when spread over long distances, the airborne dust can provide a natural fertilizer for plants and forests. For instance, the dust lofted from the Sahara has been shown by scientists to provide a significant amount of nutrients for the Amazon rainforest. Dust also can fertilize the ocean for phytoplankton blooms.

In late March 2018, winds associated with a series of low-pressure weather systems appeared to fuel the flow of dust across Africa. Dust storms are common in the Sahara in the springtime, as the weather changes with the seasons. However, multiple observers in the region described this week’s storms as particularly intense. 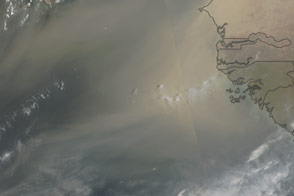