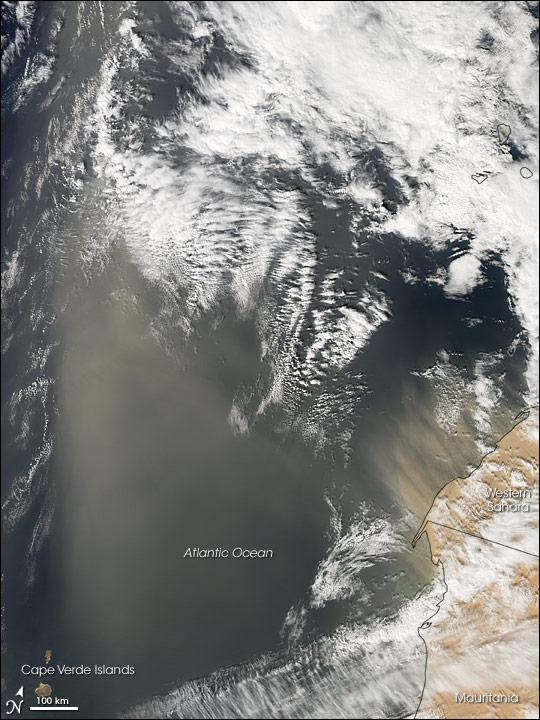 Saharan dust hovered over the Atlantic for several days in mid-January 2008. After the dust storm had continued for a few days, the Moderate Resolution Imaging Spectroradiometer (MODIS) flying on NASA’s Aqua satellite captured this image of dust plumes blowing off Africa’s west coast, on January 22, 2008.

This image shows two different areas of dust plume activity. Immediately off the coasts of Western Sahara and Mauritania, a series of tan dust plumes blow in predominantly straight lines toward the northwest. Farther west, a large, diffuse plume of dust hangs over the Atlantic Ocean, likely resulting from dust storm activity over the previous days. (The high-resolution image shows this plume continuing to the northwest.) An earlier image of this dust event showed largely clear skies over the land surface, but in this image, clouds hover overhead. The clouds may result from the same weather system that initially stirred the dust.

Deserts are often filled with gravel and bedrock with a little sand. In contrast, sand seas cover a fifth of the Sahara, and some of the desert’s dunes reach a height of 300 meters (1,000 feet). As a result, the Sahara frequently lofts large dust plumes skyward, and many of these plumes cross the Atlantic.

On the other side of the Atlantic Ocean, Saharan dust is a mixed blessing. The dust carries chemicals, such as pesticides, and disease-causing bacteria and fungi, that have degraded coral reefs in the Caribbean. On the other hand, the Caribbean Islands support vegetation thanks to dust from the vast desert; without regular dustings, the islands would probably be barren rock. Saharan dust has also played a crucial role in the development of the Amazon Rainforest.

In addition to corals and soils, Saharan dust might impact weather. After the severe hurricane season of 2005, some forecasters expected another severe season in 2006, but the 2006 season was milder than expected. A study released in 2007 suggested a link between large amounts of Saharan dust over the Atlantic in 2006 and less severe hurricanes.

Dust plumes blew off the coast of northern Africa in mid-January 2008. Dust lingered over the Atlantic Ocean late in the month.