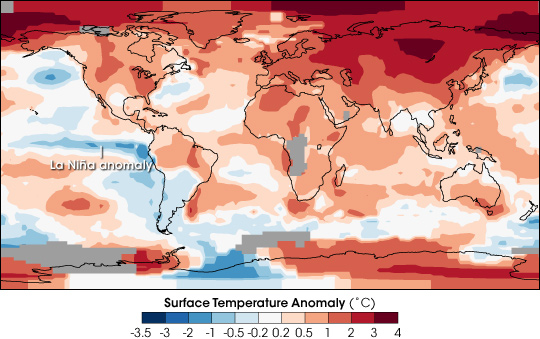 In 2007, a moderately strong La Niña event put a chill on the eastern Pacific Ocean, and the Sun was near the low spot in its 11-year cycle of variability. Nevertheless, global average surface temperature in 2007 was still tied for the second warmest year in the instrumental record compiled by scientists at NASA’s Goddard Institute for Space Studies, which goes back to 1880. The record warmest year was 2005, with 1998—now tied with 2007—in second place. The global average temperature anomaly for 2007 was 0.57 degrees Celsius (about 1 degree Fahrenheit) above the 1950-1980 baseline.

This image shows the spatial patterns of temperature anomalies across the planet in 2007. Warm anomalies (compared to the baseline) are red, places where temperatures were the same as the baseline are white, and cold anomalies are blue. The cold anomaly in the Pacific Ocean shows the impact of La Niña, which was particularly strong in the second half of 2007. During La Niña events, the trade winds that blow steadily westward across the Pacific near the equator get stronger. These strong winds drag the sun-warmed surface water into the Western Pacific. Cold water from deep in the ocean wells up off the coast of South America and spreads westward along the equator. The cold anomaly over part of Antarctica is also linked to La Niña through a regional climate phenomenon called the Antarctic Oscillation.

A single year of data on its own can’t be used to either prove or disprove a trend like global warming. However, as the NASA GISS scientists point out in their summary for 2007, the temperature anomaly of 2007 “continues the strong warming trend of the past thirty years that has been confidently attributed to the effect of increasing human-made greenhouse gases. The eight warmest years in the GISS record have all occurred since 1998, and the 14 warmest years in the record have all occurred since 1990.”

Despite that a moderately strong La Niña event put a chill on the eastern Pacific Ocean, and the Sun was near a low in its 11-year cycle of variability, global average surface temperature in 2007 was still tied for the second warmest year in the instrumental record.