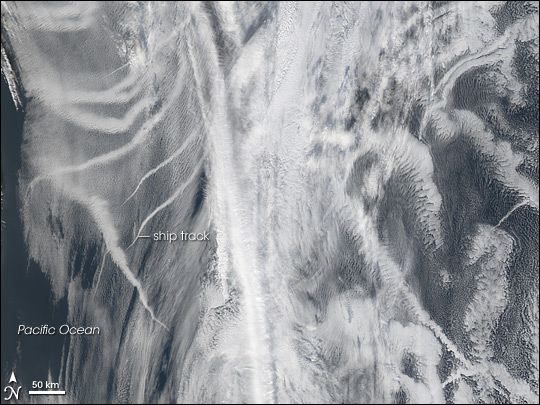 They may look like airplane contrails, but the streaky clouds shown in this photo-like image formed around the exhaust left in the wake of ships traveling along the northwest coast of North America. All clouds form when water molecules coalesce onto tiny particles in the atmosphere. The particles can be natural things like dust or sea salt, but they can also be aerosols emitted by human activity. With only the water’s surface to influence it, air over the ocean tends to be uniform, often resulting in flat sheets of clouds that cover a wide area. When ships introduce new particles into the air by pumping out a stream of exhaust, water molecules readily cling to the particles, creating long clouds called ship tracks that trail behind a ship.

Scientists are interested in ship tracks because they want to understand how human emissions influence clouds and, ultimately, Earth’s climate. Most emissions—from things like factories, power plants, and cars—are released over land where the air is turbulent. It is difficult to track emissions in the constantly churning air, and even harder to determine how those emissions influenced cloud formation. Emissions from ships, on the other hand, end up in the relatively calm air over the ocean, and the clouds that form from ship exhaust are distinctly different from other clouds.

Ship tracks have also shown that man-made aerosols influence rainfall in some environments. The smaller droplets that make the cloud brighter may prevent rainfall, since water does not collect in large enough clusters to condense into rainfall. As a result, less rain may fall from clouds formed around man-made aerosols in some environments. In other environments, such as the hot-humid climate of the southeastern United States during the summer, aerosols seem to enhance rainfall because they can intensify thunderstorms.

The Moderate Resolution Imaging Spectroradiometer (MODIS) on NASA’s Aqua satellite captured this image of ship tracks over the Pacific Ocean on January 21, 2008.

You can download a 250-meter-resolution KMZ file of the ship tracks suitable for use with Google Earth.

They may look like airplane contrails, but the streaky clouds shown in this photo-like image formed around the exhaust left in the wake of ships traveling along the northwest coast of North America.