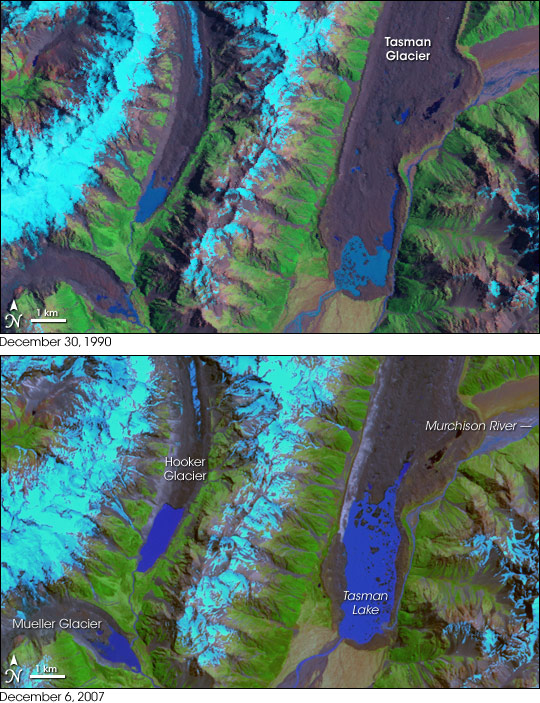 In November 2007, New Zealand’s National Institute of Water and Atmospheric Research (NIWA) announced that ice volume in the country’s Southern Alps had shrunk nearly 11 percent over the previous 30 years. NIWA scientists attributed the glacial retreat primarily to global warming and stated that, in the absence of substantial climate cooling, 12 of the largest glaciers would not recover to their previous sizes.

Although composed of ice, the glacier snouts in this image appear dirty gray-brown. The color results from literal dirt. As glaciers move, they pick up rocks and debris and carry it with them downstream. Upstream from their drab exteriors, the Hooker and (especially) Tasman Glaciers are more pristine; a pale blue streak on the Hooker glacier attests to its icy interior. The dark coatings on these glaciers absorb more of the Sun’s energy and can lead to faster melting, but if the insulating layer of dirt and debris is thick enough, it can actually insulate the ice and slow the melting process.

In the 1990 image, a small lake rests at the snout of each glacier. According to NIWA scientists, these glacier-snout lakes increase the likelihood that chunks of ice will break off the glacier. In addition, the water blocks the glacier’s future advance. In the 2007 image, both glacier-snout lakes had grown, especially that of the Tasman Glacier. NIWA scientists stated that this glacier had retreated by 5 kilometers (about 3 miles) over the previous three decades. They also stated that New Zealand glaciers on the whole had lost 5.8 cubic kilometers (roughly 1.4 cubic miles) over the same time period.

You can download a KMZ file comparing the Tasman glacier in 1990 to 2007 suitable for use with Google Earth.