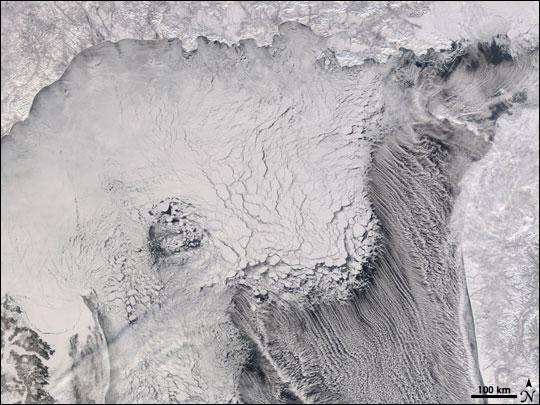 Tucked between Siberia and Russia’s frozen Kamchatka Peninsula, the Sea of Okhotsk was a field of ice when the Moderate Resolution Imaging Spectroradiometer (MODIS) on NASA’s Terra satellite captured this photo-like image on February 6, 2007. The Sea of Okhotsk is at the same latitude as the Gulf of Alaska, but unlike the Gulf, the sea freezes between October and March. Fresh water from rivers like the Amur dilutes the relatively shallow, salty sea and raises the temperature at which ice can form. During the winter, the Sea of Okhotsk is beset by frigid air from the Siberian landmass, and this creates large ice floes that cover much of the sea.

The flow of cold Arctic air and its effect on the sea are evident from this image. Large chunks of sea ice float on the water, separated by cracks through which the black surface of the sea is evident. When this image was taken, wind swept from Siberia in the northwest over the ice. When the frigid air met the moist air over open water, clouds formed. The strong winds comb the clouds into long streamers, a formation called clouds streets.