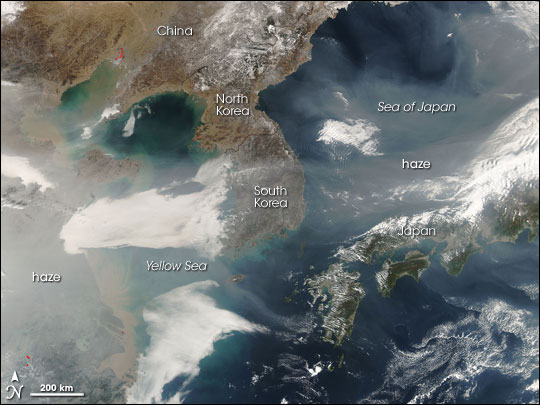 On February 6, 2007, thick haze blew across the Yellow Sea and the Korean Peninsula toward Japan. The Moderate Resolution Imaging Spectroradiometer (MODIS) on NASA’s Aqua satellite took this picture the same day.

In this image, the band of haze appears to narrow somewhat as it crosses over South Korea, then spreads out over the Sea of Japan (East Sea). Skies over North Korea and the northern portion of the sea are relatively clear. Opaque white clouds mix with the haze, especially over the Yellow Sea and Japan. Through the haze, thick brown sediment can be seen along China’s coast.

The haze appears particularly thick in southeastern China and western Japan. In part, the smoggier appearance results from the location of those areas along the edge of the swath that the satellite observed. At the swath edges, the MODIS sensor is looking through the atmosphere at an angle, creating a longer line of sight that enhances the appearance of haze.

China’s air pollution problems are a function of its rapidly developing economy. With an energy infrastructure dominated by coal-burning power plants and a dramatic increase in private vehicle ownership over the past decade, the country has experienced a deterioration in air quality, a problem which spills over national boundaries. On February 8, 2007, the Worldwatch Institute issued a news release that China’s parliament backed a plan to shut down many of the nation’s smaller coal-fired power plants. According to World Watch magazine, small plants release 20 times as much smog-forming pollutants as larger plants.

On February 6, 2007, thick haze blew across the Yellow Sea and the Korean Peninsula toward Japan. In this image, the band of haze appears to narrow somewhat as it crosses over South Korea, then spreads out over the Sea of Japan (East Sea).

On February 6, 2007, thick haze blew across the Korean Peninsula toward Japan. Two weeks later, more haze hung over the region.

Haze over the Yellow Sea

A thick plume of haze blew off the coast of China, across the Yellow Sea, and toward the Korean Peninsula in early December 2008.