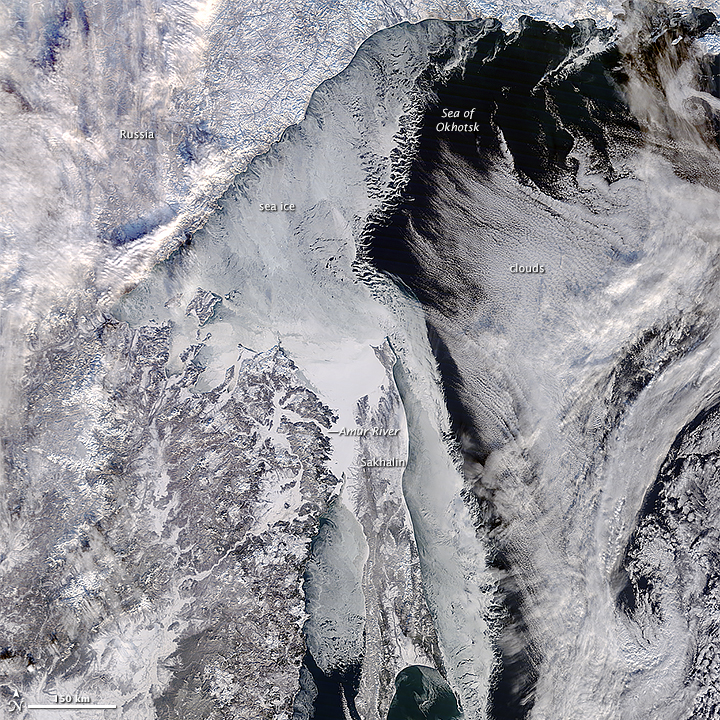 Located off the east coast of Russia, the Sea of Okhotsk stretches down to 45 degrees North latitude, and sea ice forms regularly in the basin. In fact, it is the lowest latitude for seasonal sea ice formation in the world. On January 4, 2015, the Moderate Resolution Imaging Spectroradiometer (MODIS) on NASA’s Terra satellite captured this image of the ice-covered Sea of Okhotsk.

Every winter, winds from East Siberia, frigid air temperatures, and a large amount of freshwater flowing out from rivers promote the formation of sea ice in the region. Much of the freshwater comes from the Amur River, one of the ten longest rivers in the world.

From year to year, variations in temperature and wind speed can cause large fluctuations in sea ice extent. The sea spans more than 1,500,000 square kilometers (600,000 square miles), and ice cover can spread across 50 to 90 percent of it at its annual peak. On average, that ice persists for 180 days.

According to research published in 2014, the region's sea ice has been decreasing over a 34-year period. Annual ice production in the Sea of Okhotsk dropped by more than 11 percent from 1974 to 2008. The researchers suggest that this decline has, at least in part, "led to weakening of the overturning in the North Pacific." Water with less sea ice is fresher, less dense, and unable to sink and circulate as well as salty, dense water. A weakened circulation in the North Pacific has implications for the supply of nutrients, such as iron, that affect biological productivity. 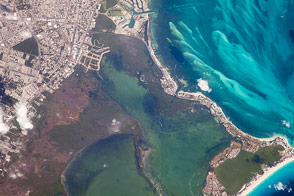