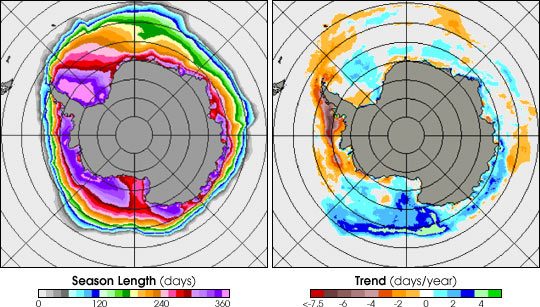 While recent studies have shown that on the whole Arctic sea ice has decreased since the late 1970s, satellite records of sea ice around Antarctica reveal an overall increase in the southern hemisphere ice over the same period. Continued decreases or increases could have substantial impacts on polar climates, because sea ice spreads over a vast area, reflects solar radiation away from the Earth’s surface, and insulates the oceans from the atmosphere.

In a study just published in the Annals of Glaciology, Claire Parkinson of NASA’s Goddard Space Flight Center analyzed the length of the sea ice season throughout the Southern Ocean to obtain trends in sea ice coverage. Parkinson examined 21 years (1979-1999) of Antarctic sea ice satellite records and discovered that, on average, the area where southern sea ice seasons have lengthened by at least one day per year is roughly twice as large as the area where sea ice seasons have shortened by at least one day per year. One day per year equals three weeks over the 21-year period.

The image on the left shows the average number of days that the ocean surface was covered by sea ice from 1979 to 1999. The image on the right shows the change in duration of sea ice coverage over that period. Blue and green colors show areas where the sea ice is lasting longer, while orange and red colors represent a decrease in the number of days the ocean is frozen. The larger area covered by longer-lasting ice indicates an increase in the amount of Antarctic ice.