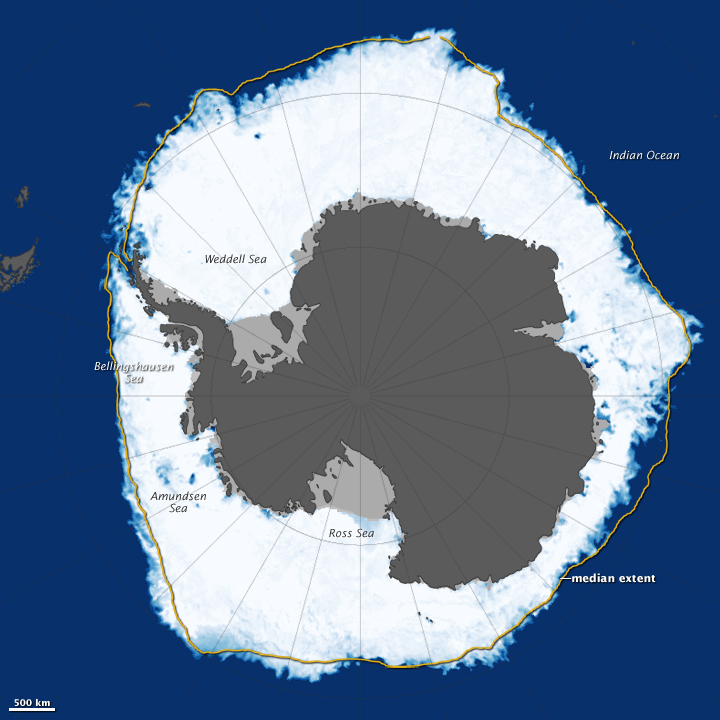 The map above shows sea ice extent around Antarctica on September 22, 2013, when ice covered more of the Southern Ocean than at any other time in the satellite record. The map is based data from the Advanced Microwave Scanning Radiometer 2 (AMSR2) sensor on Japan’s Global Change Observation Mission 1st-Water (GCOM-W1) satellite. Land is dark gray, and ice shelves—which are attached to land-based glaciers but floating on the ocean—are light gray. The yellow outline shows the median sea ice distribution for September from 1981 to 2000. Sea ice extent is defined as the total area in which the ice concentration is at least 15 percent.

“For the second year in a row, we set a record high winter maximum,” said Walt Meier, a glaciologist at NASA’s Goddard Space Flight Center. “But even though it is a record high, it is only 3.6 percent above the 1981-2010 average maximum. That means the difference between this year and an average year is that the ice edge extended an average of only about 35 kilometers (22 miles) farther this year.”

Antarctic sea ice cover reaches its minimum extent each year in February or March; the ice cover then grows until reaching its maximum extent in September or October. The graph above shows the maximum extent for each September since 1979 in millions of square kilometers. There is variability from year to year, though the overall trend shows growth of about 1.5 percent per decade.

The image below shows how the 2012 and 2013 Antarctic ice growth seasons compare. In 2013 (black line) and 2012 (red line), the ice reached the highest extents ever recorded, but it was only slightly above the historical average (blue line). Light blue regions show the range of natural variability.

While researchers continue to study the forces driving the growth in sea ice extent, it is well understood that multiple factors—including the geography of Antarctica, the region’s winds, as well as air and ocean temperatures—all affect the ice.

Geography and winds are thought to be especially important. Unlike the Arctic, where sea ice is confined in a basin, Antarctica is a continent surrounded by open ocean. Since its sea ice is unconfined, it is particularly sensitive to changes in the winds. As noted by the National Snow and Ice Data Center, some research has suggested that changes in Antarctic sea ice are caused in part by a strengthening of the westerly winds that flow unhindered in a circle above the Southern Ocean.