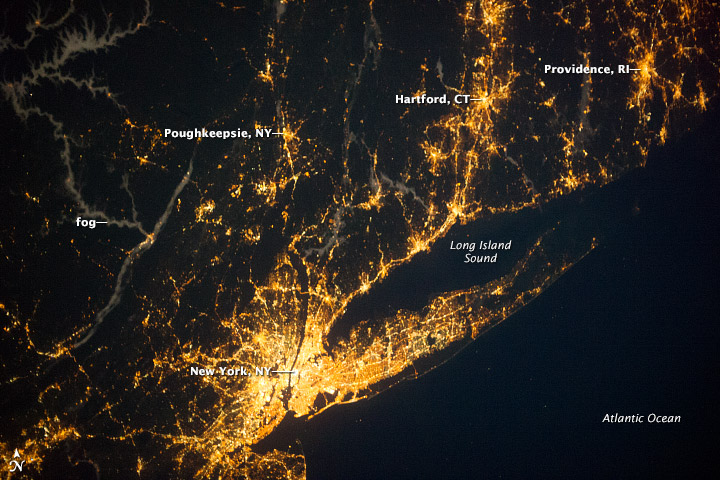 Long Island Sound is an estuary along the upper East Coast of the United States, bounded by Long Island (New York state) to the south, the coastline of Connecticut to the north, and the southeasternmost coastline of New York to the west. The Sound is well outlined by city and roadway lights in this nighttime photograph taken from the International Space Station (ISS).

The waters of Long Island Sound and the Atlantic Ocean are mostly devoid of lights (except for a few ships), while several nearby metropolitan areas stand out. Directly to the west and southwest of the Sound, the New York City metropolitan area forms the brightest and most extensive area of lights. In terms of lighting, the area seems largely recovered from Hurricane Sandy, which affected the region in late October 2012. Further inland, the lights of Poughkeepsie, New York, are visible, as are the urban centers of Hartford, Connecticut, and Providence, Rhode Island, to the northeast.

The manmade traceries of light are accompanied by a natural phenomenon: Fog is visible along several river valleys (image upper left). Cold air streaming into the valleys at night causes local temperatures to drop. Fog develops when temperatures drop low enough for water to condense from the air. The fog, appearing light blue-gray, is illuminated from above by moonlight and from below by cities and towns close to river channels.

An astronaut photograph taken from the ISS in 2003 with a similar lens and field of view provides an interesting illustration of the advancement in the light sensitivity and resolution of cameras over the past ten years.

Astronaut photograph ISS037-E-1802 was acquired on September 20, 2013, with a Nikon D3S digital camera using a 50 millimeter lens, and is provided by the ISS Crew Earth Observations experiment and Image Science & Analysis Laboratory, Johnson Space Center. The image was taken by the Expedition 37 crew. It has been cropped and enhanced to improve contrast, and lens artifacts have been removed. The International Space Station Program supports the laboratory as part of the ISS National Lab to help astronauts take pictures of Earth that will be of the greatest value to scientists and the public, and to make those images freely available on the Internet. Additional images taken by astronauts and cosmonauts can be viewed at the NASA/JSC Gateway to Astronaut Photography of Earth. Caption by William L. Stefanov, Jacobs at NASA-JSC.

City lights trace one of the most densely populated portions of the United States.