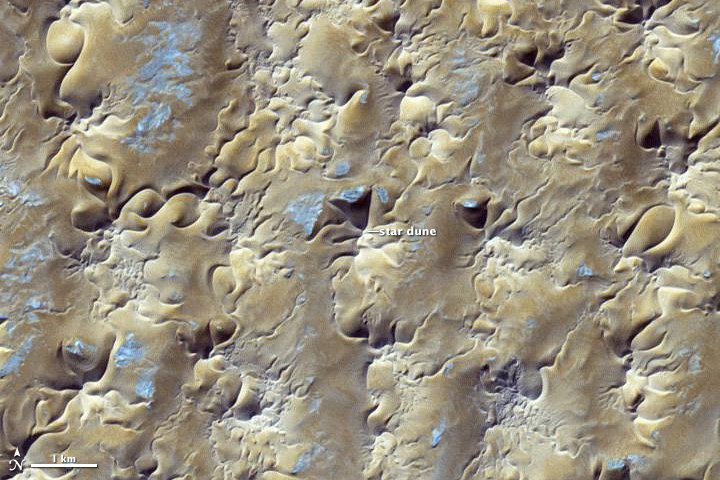 In some areas, winds tend to blow in roughly the same general direction all year. The Grand Erg Oriental, a sprawling sea of sand dunes in the Saharan Desert, is not one of them.

The winds in northeastern Algeria tend to be complex and changing. Easterly summer winds shift in the winter, becoming westerly. Meanwhile, passing storms and local geographical features further muddle the picture. If winds came consistently from one direction, crescent-shaped barchan dunes would reign. But the dominant dune type along the southern edge of Grand Erg Oriental (shown above) are large, pyramid-shaped star dunes, which only form in areas where winds blow from multiple directions.

The image was acquired by the Advanced Spaceborne Thermal Emission and Reflection Radiometer (ASTER) on NASA’s Terra satellite on October 27, 2012. It was made from a combination of near-infrared and visible light. In this type of false-color image, sand is tan and shadows are black or gray. The blue-tinted areas are likely mineral-rich evaporites. The image is centered at 29.8°north latitude, 7.9°east longitude, near the town of Gadamis. As is common with star dunes, some of the dunes have long interlacing arms connecting to nearby dunes.

Star dunes comprise about 8.5 percent of the world’s sand dunes. Other areas they can be found include the Badain Jaran in China, the Gran Desierto de Altar in Mexico, and the eastern Rub’ al Khali in the Arabian peninsula.

Clément Narteau, a geophysicist at the Paris Institute of Earth Physics and author of a 2012 study about star dunes, noted that all of the dunes in the image have the same approximate height. “Star dunes tend to grow upward until they reach a maximum size, constant over the entire dune field,” Narteau said. “Then, they exchange sedimentary material through their radiating arms.”

There are very practical reasons for earth scientists to study how dunes form and evolve. “Understanding the dynamics of dunes is critical for developing infrastructure—such as oil and gas fields and the roads and pipelines that link them, as well as for controlling sand movement in areas where they are common,” noted Desert Research Institute researcher and dune specialist Nicholas Lancaster.