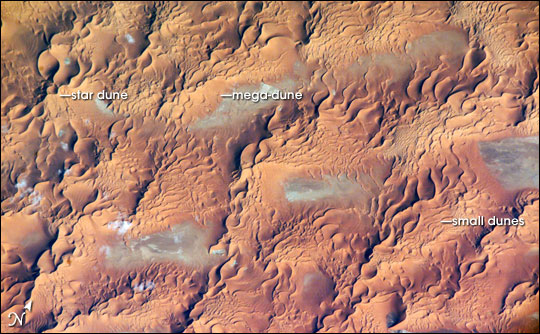 This view from one of the smaller dune seas in the central Sahara Desert shows the complex but regular patterns produced in deserts where wind and sand both abound. The image is centered at 26.9 North, 7.4 East, over eastern Algeria. Geologists now know that dune seas (also called ergs) exhibit at least three orders of dune size. The biggest dunes, called mega-dunes, probably took hundreds of thousands of years to accumulate, starting when the Sahara began turning arid roughly 2.5 million years ago. Rivers became smaller, failed to reach the sea, and deposited their sand load in the desert. Wind did the rest, blowing the sand into aerodynamic dune forms. Superimposed on the mega-dunes are mesoscale dunes (the prefix meso- means “intermediate.”) Whereas the mega-dunes are apparently stationary, studies based on aerial photographs in other parts of the world show that mesoscale dune crests move in the course of decades. The smallest dunes form and reform the fastest, meandering over the backs of the larger dunes.

In this image, the mega-dunes appear as big, rolling lumps that zigzag toward the upper right. The “streets” between these biggest dune chains have been swept clean of sand in places, showing their original surfaces of pale mud and salts. The pale beige-grey of these areas contrasts with the otherwise burnt orange hues. Mesoscale dunes, some of which form octopus-like crests, or star dunes, mark the backs of the mega-dunes. The smallest dunes appear in patches on the eastern sides of the mega-dunes as a tracery of closely spaced crests. Interestingly, the crest orientation of the small dunes differs from the orientation of the mesoscale dunes. This difference is a common effect of local shifts in wind direction, which is influenced by dune height.

The orientation trends in the mega-dunes coincide with two of the four major trends identified in the Great Eastern Sand Sea (or Grand Erg Oriental) immediately to the north. Each orientation shift likely implies a shift in the direction of the dominant wind that formed the dunes, attesting to the climate shifts that have occurred since sand began to accumulate in the central Sahara.

Astronaut photograph ISS013-E-65526 was acquired August 8, 2006, with a Kodak 760C digital camera with an 800 mm lens, and is provided by the ISS Crew Earth Observations experiment and the Image Science & Analysis Group, Johnson Space Center. The image in this article has been cropped and enhanced to improve contrast. The International Space Station Program supports the laboratory to help astronauts take pictures of Earth that will be of the greatest value to scientists and the public, and to make those images freely available on the Internet. Additional images taken by astronauts and cosmonauts can be viewed at the NASA/JSC Gateway to Astronaut Photography of Earth.