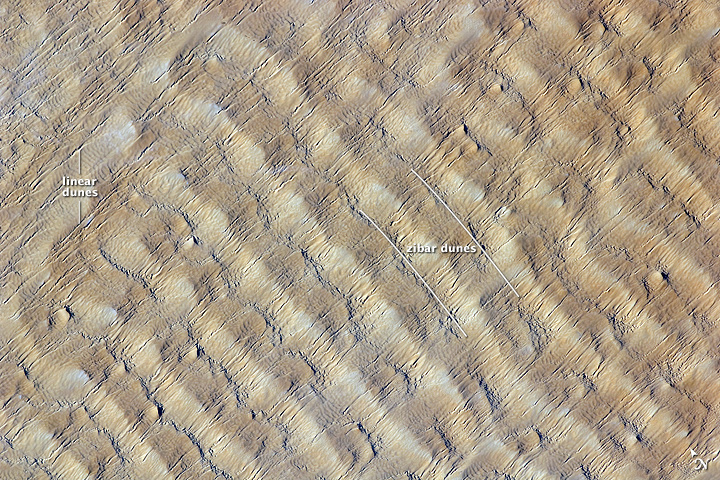 This detailed astronaut photograph highlights sand dunes in the Fachi-Bilma erg (sand sea) in the central-eastern part of the Tenéré Desert. The Tenéré occupies much of southeastern Niger and is considered to be part of the larger Sahara Desert, which stretches across northern Africa. Much of the Sahara is comprised of ergs; with an area of approximately 150,000 square kilometers (57,915 square miles), the Fachi-Bilma is one of the larger sand seas.

Two major types of dunes are visible in the image. Large, roughly north-south oriented transverse dunes fill the image frame. This type of dune tends to form at roughly right angles to the dominant, northeasterly winds. The dune crests are marked in this image by darker, steeper sand accumulations that cast shadows. The lighter-toned zones between are lower, interdune “flats.” The large dunes appear to be highly symmetrical with regard to their crests. This pattern suggests that the crest sediments are coarser, preventing the formation of a steeper slip face on the downwind side of the dune by wind-driven motion of similarly sized sand grains.

This particular form of transverse dune is known as a zibar, and it is thought to form by winnowing of smaller sand grains by the wind, which leaves the coarser grains to form dune crests. A second set of thin linear dunes oriented at roughly right angles to the zibar dunes appears to be formed on the larger landforms and is therefore a younger landscape feature. These dunes appear to be forming from finer grains in the same wind field as the larger zibars.

Astronaut photograph ISS022-E-5258 was acquired on December 1, 2009, with a Nikon D2Xs digital camera fitted with a 400 mm lens, and is provided by the ISS Crew Earth Observations experiment and Image Science & Analysis Laboratory, Johnson Space Center. The image was taken by the Expedition 22 crew. The image in this article has been cropped and enhanced to improve contrast. Lens artifacts have been removed. The International Space Station Program supports the laboratory to help astronauts take pictures of Earth that will be of the greatest value to scientists and the public, and to make those images freely available on the Internet. Additional images taken by astronauts and cosmonauts can be viewed at the NASA/JSC Gateway to Astronaut Photography of Earth. Caption by William L. Stefanov, NASA-JSC.