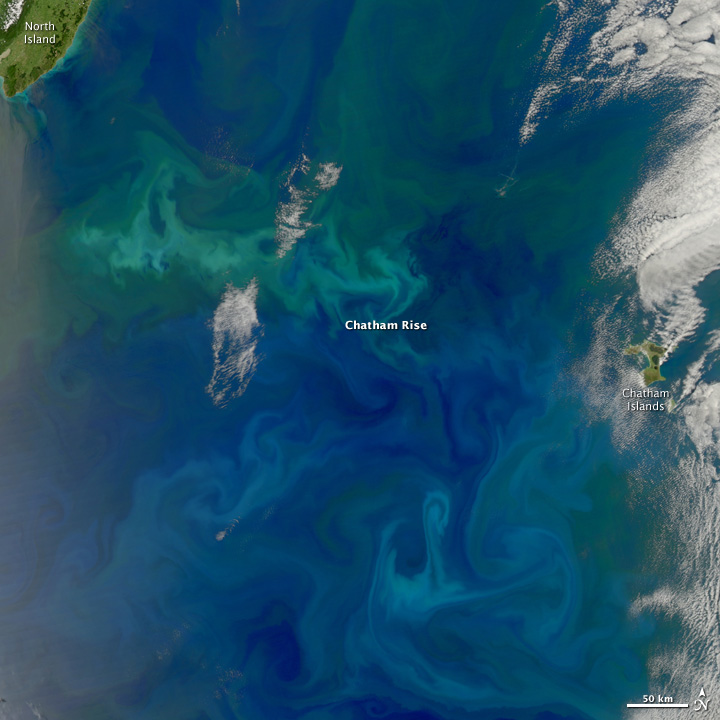 An expansive bloom of phytoplankton (single-celled, plant-like organisms) traced colorful swirls across the South Pacific Ocean between New Zealand (left) and the Chatham Islands (right) on December 23, 2009. The colors come from chlorophyll and other pigments that the phytoplankton use to capture light for photosynthesis. The milky turquoise parts of the bloom may include phytoplankton called coccolithophores, which have a chalk-like plating that is very reflective.

The Chatham Rise, an underwater plateau that stretches from the South Island of New Zealand (not pictured) to beyond the Chatham Islands, separates two areas of deeper water to the north and south. ( Tides and other currents flowing over this submarine topography enhance vertical mixing in the water column. That mixing and the location of the rise along the subtropical front (where cold currents from the Antarctic meet warmer, subtropical waters) foster large blooms of phytoplankton in the area, especially in the Southern Hemisphere spring and summer.

Like plants on land, phytoplankton are the foundation of the marine food web, using sunlight to convert atmospheric carbon dioxide and water into the carbohydrate glucose. All other marine life—from squid, to fish, to whales—depend directly or indirectly on phytoplankton, which makes tracking the size and frequency of phytoplankton blooms important to biologists monitoring the health of our oceans.

Phytoplankton also influence and are influenced by the climate. Phytoplankton remove the same amount of the greenhouse gas carbon dioxide from the air as land plants do, helping to counter global warming. But warming of the oceans appears to be responsible for a global decline in phytoplankton productivity over the past decade.

This image was captured by the Moderate Resolution Imaging Spectroradiometer (MODIS) on NASA’s Aqua satellite, which has been monitoring ocean chlorophyll and other of Earth’s vital signs since 2002.

An expansive bloom of phytoplankton traced colorful swirls across the South Pacific Ocean between New Zealand (left) and the Chatham Islands (right) on December 23, 2009.

On November 15, 2008, a bloom of plant-like organisms known as phytoplankton encircled the Chatham Islands.