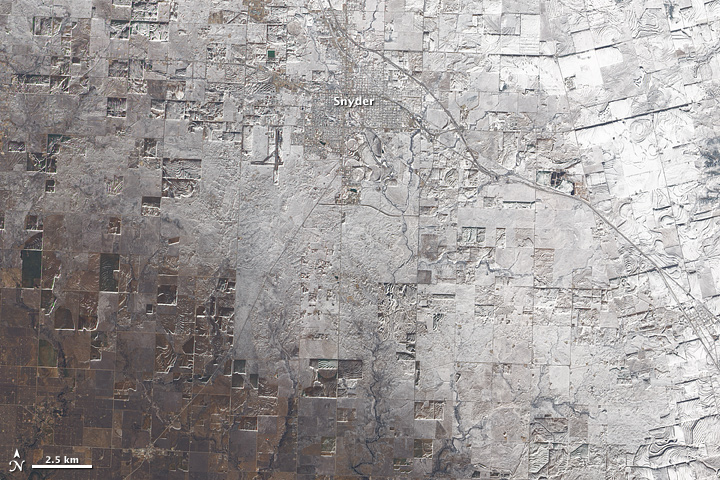 The late-December snowstorm that left a swath of white across the south-central United States on December 25, 2009, covered the Texan town of Snyder. On December 26, 2009, the Advanced Land Imager (ALI) on NASA’s Earth Observing-1 (EO-1) satellite captured this true-color image of Snyder and the surrounding area.

Taken along the southwestern edge of the snow cover, this picture shows an apparent gradient of snow thickness. Snow cover appears most opaque in the upper right corner of the image, and gradually thins toward the south and west. A combination of snow, bare ground, and the Sun’s low angle accentuates differences in land use. Grids of major roadways and side streets indicate Snyder’s city limits. Immediately southeast of town, a cluster of circles and semicircles suggests center-pivot irrigation systems. Surrounding the town, rectangular and circular shapes indicate cropland. East of town, a highway runs northwest-southeast through the area.

The snowfall image acquired by another NASA satellite the previous day indicates that snow cover was slightly more extensive than what appears here. The snow likely melted slightly between December 25 and 26.

Snow cover stretched across the south-central United States on December 25, 2009.