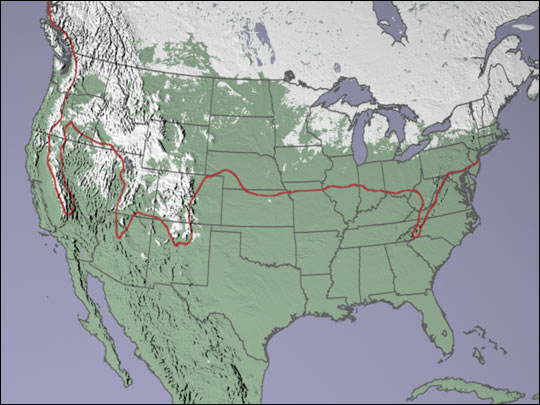 New maps of snow cover produced by NASA’s Terra satellite show that this year’s snow line stayed farther north than normal. When combined with land surface temperature measurements, the observations confirm earlier National Oceanic and Atmospheric Administration reports that the United States was unusually warm and dry this past winter.

The above map shows snow cover over the continental United States from February 2002 and is based on data acquired by the Moderate-Resolution Imaging Spectroradiometer (MODIS). The amount of land covered by snow during this period was much lower than usual. With the exception of the western mountain ranges and the Great Lakes region, the country was mostly snow free. The solid red line marks the average location of the monthly snow extent; white areas are snow-covered ground. Snow was mapped at approximately 5 kilometer pixel resolution on a daily basis and then combined, or composited, every eight days. If a pixel was at least 50 percent snow covered during all of the eight-day periods that month, it was mapped as snow covered for the whole month.

Image by Robert Simmon, based on data from the MODIS Snow/Ice Global Mapping Project